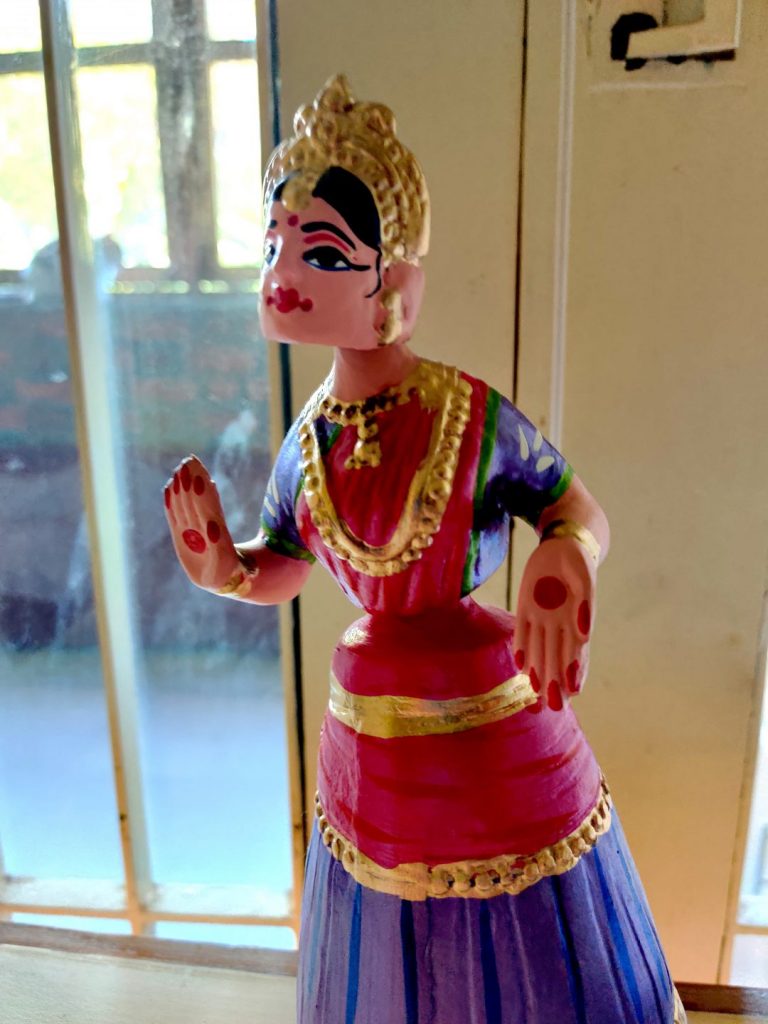 When I was a little girl, living as a non-native in Chennai, Tamilnadu, my visits to my neighbours’ houses would constitute playing with the ‘dancing doll’, admiring its shining, colourful attire, painted by skilled craftsmen on sago, plaster of Paris, wood pulp and papier-mâché. I would play with its oscillating neck, and waist with my little fingers. The doll was captivating, complete with the henna on her hands, the mudra position of her fingers, the beautiful headdress, jewellery, and — something I realised much later in life — the Aryan skin tone, and the Brahminical beauty of the face.

A terracotta doll with a flexible head, neck, waist, and a billowing skirt that moves in any direction, the Thanjavur dancing doll is comes in small to large sizes and is easily located in almost every home. Dating back to the 19th century during the reign of King Saraboji it continues to be a part of the heritage of the town: its silks, classical dance forms, craftsmanship, etc.

As for the craftsmanship of the doll, the neck of the doll is placed inside a hook extending from the lower body and hence its bobs away like a dancer’s neck with ease and flexibility. The doll vicariously fulfilled my desire to learn dancing too. The bob of the neck is a beautiful reflection of the non-committal nod that afflicts most adult Indians — making it difficult to comprehend. It’s a sign of diplomacy, reflection, bodily flexibility, the dancer’s nod, and an amazing communication at once. I would ask questions to the doll and move the head, interpreting it to suit my immediate needs. What a wonderful way to conduct an intercultural communication!

In a combination of two dolls, the male counterpart to this doll is usually pot-bellied, a brahman sometimes accompanied by his wife who is depicted seated next to him. It seems to be a homage to the patriarchy of the culture, where the woman is the bedrock of the home and cultural traditions. Women celebrate women during the period of Navaratri (nine nights), when the mother goddess Durga is believed to descend to her maternal home. These dolls and myriad others find a place of pride on the nine steps (“Golu”), where they serve as expressions of cultural beliefs and narratives.

Looking back at my fascination, I now understand my visceral connection with the doll — and how it stemmed from my own sense of an outsider to the community and the beauty of the women. Unlike the rest of the Brahminical society, the doll did not seem to have boundaries of participation. Playing with it for hours, I could make it nod, I could make it dance, I could hold it (gently of course), and have my own cerebral sense of connection with it. It later struck me that the doll could be an answer to the caste divisions — and allowed access to a world that was formidable to the average Dravidian with dark skin and not belonging to the brahmin caste.

Almost every girl in my neighbourhood resembled the doll’s beauty. As a little girl it fulfilled a need in me — wanting to come close to these beauties and attempt to imitate their silken grace.

See All Posts by Seema Khanwalkar

Dr. Seema Khanwalkar is a Professor, Adjunct Faculty at CEPT University, Ahmedabad. She teaches courses in Semiotics, Semantics and Design, Cultural Anthropology, Design Ethnography, Meaning and Design, and Representation of Space, to students of Architecture, Design, and Management. For 25 years she has also consulted to Indian companies on branding and communication strategies.