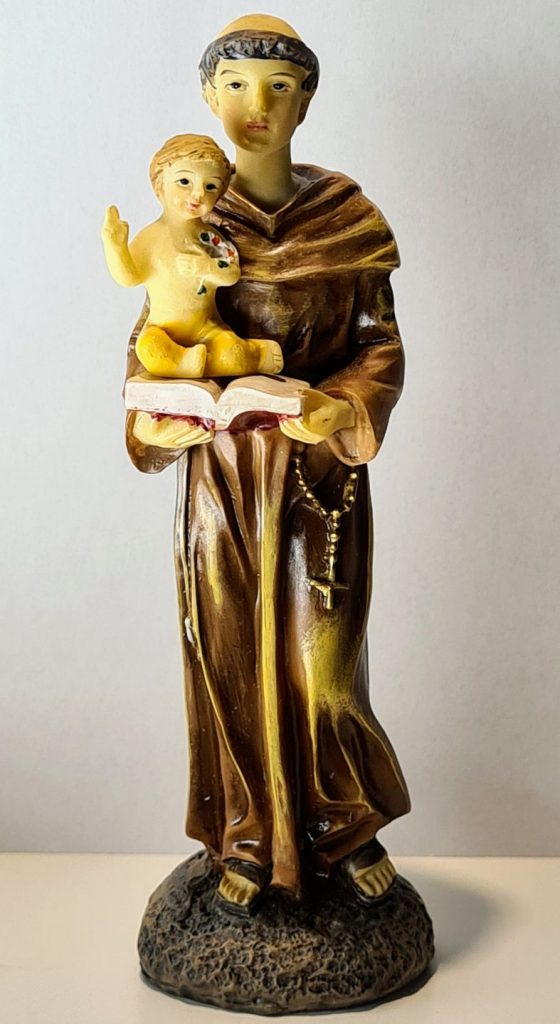 The advantage of being Colombian and brought up as a Catholic allowed me, in my youth, to hand over the burden of my anxieties to the mercy of the saints. One of my favourites was Anthony of Padua, known as one of the most miraculous saints. I have a statuette of this young Franciscan monk standing on my bedroom desk; he is holding a holy book and Jesus, depicted as an infant, is sitting on top of it.

In the Spanish and Caribbean tradition, Saint Anthony is venerated and known as the Saint of Love — the Holy One who finds people and missing objects, like my car keys or my mobile phone. He has helped me find such things on many occasions. I like him because he has the power of making visible that which is hidden.

The mythology around Saint Anthony is the result of our cultural syncretism. In the Afro-Caribbean fusion, Anthony is closely related to Eleggua — a deity who has a mischievous character. He is the owner of roads and destiny, and he opens or closes the road to happiness.

To receive the help of Saint Anthony in finding your missing object, you need only pray. Depending on the degree of difficulty of the favour, though, it will require a lot of effort on his part to execute the miracle… especially if the assignment is finding love. In order to stress the importance of your need, then, if you are single and want to find a suitable partner it’s a common ritual to turn your Saint Anthony figurine upside-down.

Nowadays, given the increased difficulty in finding Love, the St. Anthony ritual seems to have become more urgent. Even bribes and coercion are common. The last time I went to Colombia, I bought the statuette shown here. It features a removable baby Jesus — which allows you to snatch the child from Anthony and hide him until he finds you a partner. No doubt the Church would protest this sort of thing, but our multicultural society allows us to be playful with sacred symbols.

I’m very attached to my Saint figure. Although I been waiting for quite a while to find Mr. Right, I still have faith in him. At any rate, I’d rather put my trust in Saint Anthony than in ‘Saint Tinder’!

See All Posts by Martha Arango

Martha Arango (Beyond Research) is a pioneer in using semiotic analysis in the marketing research industry in Sweden, having worked for 20+ years with clients in the public and the private sector. She has a wide-ranging expertise in finding insights and strategies for the development of the client’s brand values and their communication platforms. She has conducted training, workshops and lectures in Semiotics for companies in Europe, Asia, and Latin America.