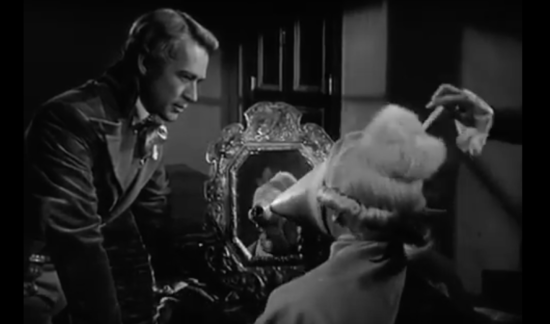 Robespierre is seated in front of a mirror, having his wig powdered as he talks with another revolutionary, St. Just. The off-camera servitor doing the powdering is reduced to a disembodied hand holding a puffball on a stick. Robespierre holds a paper cone with a handle, open side toward him like a reversed megaphone, as St. Just urges him to consider the possibility that their associate Duval may be an impostor scheming against them. Robespierre has just lowered the cone from his face when the scene begins, and at one point he puts it back over his face, which causes his muffled voice to boom weirdly inside it as he says, “The man’s record is perfect.” He lowers the cone again as Duval enters and toys with it as the three men hold a barbed colloquy. After Duval exits to ominous music, the puffball steals back into the frame and Robespierre raises the cone to his face once more as the interrupted powdering resumes.

It’s a throwaway moment in a strange little film — Reign of Terror (1949), also known as The Black Book — but it has stayed with me because it marks a turning point in my education at the movies. I saw it in a film noir class in senior year of college, part of a surge of interest in movies connected to meeting Tina, a film major with very short very red hair, black fingernails, and no time for dolts. Until I met her, my idea of a significant object in a movie was the freshly poached deer carcass that Errol Flynn carries yokewise across his shoulders in The Adventures of Robin Hood, bonking chainmailed flunkies with it as he swaggers into a castle filled with his enemies.

Tina and her film-major crew taught me to appreciate Robespierre’s cone. You spend the whole scene wondering when the hovering hand will start powdering again, obliging him to put the cone up to his face, and you want to hear again what it does to his voice. None of this has much to do with the plot, but that’s the point. The resonant, rhythmic interplay of objects and bodies is part of the essential business of movies in a way that runs deeper than plot or theme.

Sometimes a resonant object does converge with plot and theme, of course. I also saw In a Lonely Place in that film noir class, and I was deeply impressed by Humphrey Bogart’s encounter with a grapefruit knife in Gloria Grahame’s kitchen. Bogart, Grahame’s moody new boyfriend who may possibly be a homicidal monster, marvels at the knife’s angled tip and straightens it out, wrecking it without a second thought because he’s never seen a grapefruit knife before. Harmless and easily corrected bachelor quirk or indicator of deeper intractable savagery? It’s the kind of question a resonant object can raise — and as a new boyfriend who had passed the powdering cone test but whose salvageability was still to be adjudicated, the answer mattered to me a great deal.