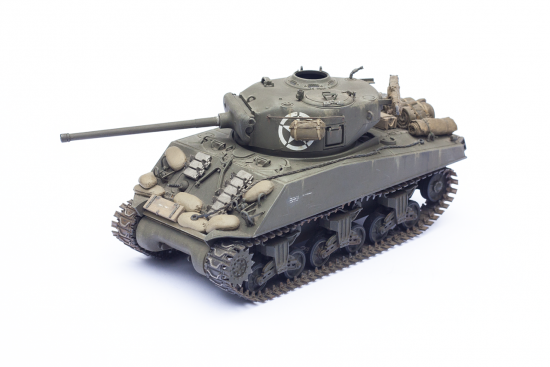 I’m a competitive model-builder — model tanks, specifically. I started building tanks when I was about 8 or 9; I’m 45 now. I first built this Sherman M4A3(76) model when I was in the sixth grade; of all the models I built as a youth, this is the only one that has survived.

Even as a kid, I had an eye for historical detail; I remember wanting to build a really accurate Sherman tank, like the ones I saw in WW2 picture books — which I pored over. So when I found this kit at the local Kmart, one look at the awesome box art was all I needed to see. (The product’s manufacturer, Tamiya, at the time represented the state of the art in fine-scale model kits.) I built the kit, painted it, and presented it to my class during our weekly Current Events discussion — we were allowed to present something creative that we’d done outside of school. Model building was considered nerdy, but I didn’t care — and I still don’t care.

Technically, what you’re looking at here is a “kit-bash” — a custom model created from more than one kit. Although the lower hull is what I built in sixth grade, when I was a high school sophomore I replaced the tank’s turret with one from another model — transforming it into a 76mm gun Sherman. I repainted the entire thing, and added stowage details. I’d become less interested in model building, but a new model company, Verlinden, came onto the scene in 1988; they made accessories so accurate and detailed that when I first saw them in the local hobby shop, Hobby Heaven, my interest was reignited. I also added scratch-built details, such as bedrolls made of toilet paper and sewing thread for tie-downs. Sure, I’d do things differently now — I’d use more mature and time-consuming painting techniques; I’d stress out about updating the finer details; I’d debate historical accuracy with my model-building pal, Bill — but I’m still proud of this tank. I was thrilled when Hobby Heaven put my model on display.

Model building is more stressful for me these days, because I do it competitively — but it’s still a joyful process. Call it a complex joy, like everything else in my adult life. I have, however, introduced my own 6th grader to the hobby. My friend Bill and I recently brought our sons to a model show and competition, where they had a good time and won prizes with their models. But they were two of only three junior entrants, and most of the other adults at the show were older than Bill and me. It was painful reminder that the hobby is in decline. Hobby shops have disappeared from the landscape. Time for model making can’t compete with screen time. So this Sherman M4A3(76) model is a fossil not only of my youth, but of a once-thriving hobby.

ALSO: Check out Tony’s HILOBROW series TANK UP, which showcases 10 of his favorite builds.