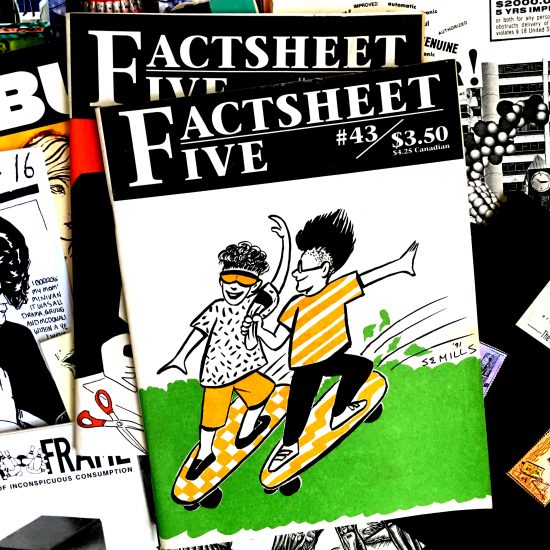 In 1986, my boyfriend and I stumbled upon an object so powerful, it changed the course of our lives.

I was a college student majoring in Spanish, planning on becoming a translator, and Mark had just started a career as a mechanical engineer. We were hanging out in his Santa Clara apartment one weekend when a package arrived.

It was a zine called Factsheet Five that he had ordered after reading an article in The Whole Earth Review called “Your Pathway to Cosmic Truth — By Mail!!” by Church of the SubGenius creator Ivan Stang. Once we opened the pages of F5, we sat hunched on his bed for hours, entranced. A spell had been cast.

Factsheet Five launched in 1982 as a 2-page photocopied newsletter by Mike Gunderloy dedicated to sci-fi fanzines. By 1986 it had exploded into a meaty directory, or “zine of zines,” that reviewed hundreds of other zines and indie publications. Opening the pages of F5 was like stepping into another universe, with every featured zine a world we wanted to visit. It was a hub with spokes that reached out to the far ends of fringe culture, connecting like-minded people from all corners of the world.

I finally understood what Timothy Leary had meant when he was asked what people should do after they’d tuned in, turned on, and dropped out. He said, “Find the others.” Factsheet Five was my guidebook for finding the others. It made me realize that I could share my ideas with other people around the world without having to deal with mass-media gatekeepers who had neither the interest nor the awareness of the long tail of niche media. It inspired Mark and me to publish a zine, called bOING bOING, to share our interest in cyberpunk, underground comics, consciousness enhancement technology, creative computing, and high weirdness. Through Factsheet Five, we met people with whom we remain lifelong friends and creative collaborators.

Before the Internet, F5 was an object that provoked a sense of urgency. It was a lifeline to another reality, another tribe. By the late ’90s, though, it was no longer essential. Zines in general could now exist online. bOING bOING (now Boing Boing) moved online.

Fortunately I still have a couple of copies of Factsheet Five, artifacts I save that allow me to revisit the magic of that earlier time.

See All Posts by Carla Sinclair

Carla Sinclair is a a freelance writer and editor, co-founder of Boing Boing, and author of four books. She was the founding editor-in-chief of O'Reilly's CRAFT magazine and founding editor of Wink Books. When she's not in her office she studies Japanese and bullies people into playing Scrabble with her.