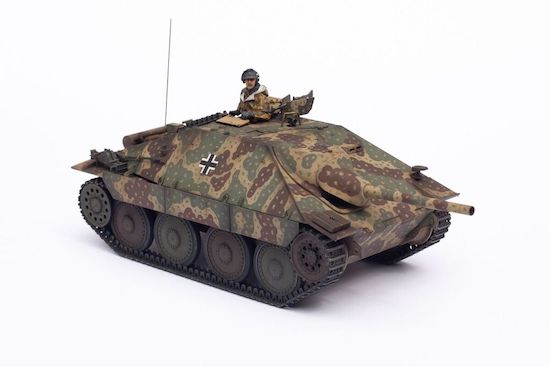 The Hetzer, a late-war German Tank Destroyer, was built on the chassis of a Czech tank called the 38(t), and many Hetzers were manufactured at the Skoda Works factory.

This model is Tamiya’s Hetzer finished with a pattern known as the Skoda Ambush. References for this type of camo are scarce as I only found two online sources at the time of my research. It appears the ambush dots were hand-painted, as opposed to the factory-applied dots on a more prevalent camo scheme called BMM.

The kit was built out of the box, as it’s an excellent offering typical of Tamiya, however, I scratch-built the tow cable and mount to replace the molded piece that came with the kit. I added a white bucket from the old Tamiya supply kit and topped off the build with an excellent Alpine commander (though he’s posed in what would actually have been the loader’s position.) I’m not sure if this figure is accurate for a Hetzer, though his aggressive posture fits the hatch just right.