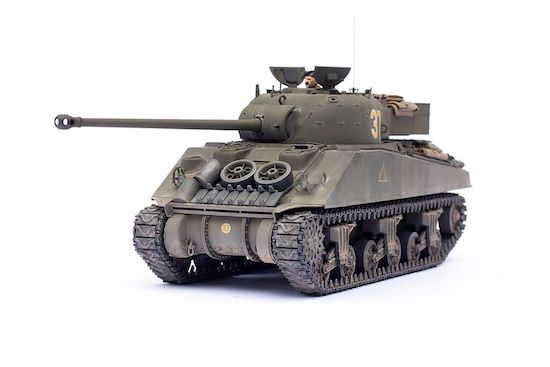 The Firefly was a British-modified version of America’s Sherman tank. The British crammed their powerful 17pdr gun into the Sherman’s too-small turret by mounting the radio in a box welded to the back of the turret. (The 17pdrs needed the turret room to compensate for the recoil of the gun.) The name Firefly came from the gun’s bright flash when it was fired.

The kit shown here is the Tasca Sherman VC Firefly with cast cheek-armour. I’m a sucker for tanks with large numbers on the turret, so I opted for tank number 37 of the 144th Regiment Royal Armoured Corps, 33rd Armored Brigade — a dusty Firefly from the June/July battles in Normandy.

The distinctive stowage box on the rear deck was scratch-built using plastic sheet. The tarps and stowage were sculpted with kneadatite. A few items from an old Verlinden stowage set were incorporated as well.

The figure was created using an altered version of the kit-supplied body, with arms from an old Tamiya tank commander figure, and an Ultra-cast head. The British-style courier gloves were custom-sculpted with kneadatite. They’re hard to see, as the figure is nestled in the commander’s hatch, but they make for a nice, very British detail.