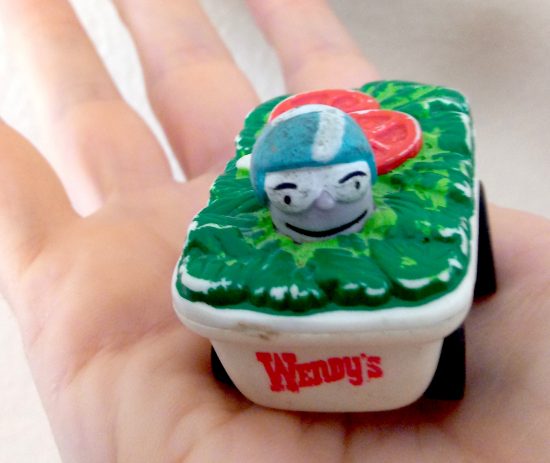 Let’s call it the saladmobile. It is today, as it was in 1991, a cheap plastic car with a simple pullback motor: junk, yes, but junk so compactly and durably made that in almost thirty years it has not broken. From a childhood of ten thousand toys, it is one of the few that has washed up into my adulthood, though I was already eighteen, and mostly beyond toys, when I acquired it. The body is a hard white polymer, boxlike, ornamented on the front and back with the Wendy’s logo. Topped with light and dark shades of lettuce, a pair of tomato slices, and a semicircle of onion, it is captained by a smiling purple radish whose blue helmet makes him look at once vaguely old-fashioned and vaguely European, like a race car driver from a movie filmed in Monte Carlo in the days of Technicolor.

I remember the night it came into my possession, and clearly. I was with a girl from my high school with whom I had fallen quickly and fearfully in love, so quickly and so fearfully that I couldn’t figure out how to tell her so. As a lark we both ordered Wendy’s Kids’ Meals. With my burger and fries came the saladmobile; with hers, I’m sure, some other toy, though I don’t recall what it was. Less than an hour later, messing around in a movie theater, I made the mistake of running the saladmobile across her head. With a few tightening clicks and a whizz of black rubber, her hair wound into the axles. For the next two hours, in the darkness, as the movie played, I slowly unspooled her hair from the machinery, holding each strand carefully in place as I worked it loose so that it wouldn’t tug at her scalp. In 1991, and maybe still today, this was the single most titillating exercise of my life. Until that night I had never realized that a body’s entire gravity could be concentrated in its fingertips.

Growing up, I had as many crushes as I did toys, but the girl from that night, or at least the memory of her, is one of the few who has washed up into my adulthood — not only a never-did, like so many of the others, but a could-have-been; a should-have-been; a why-didn’t-I?

There are times when I feel I have abandoned myself somewhere in the past. My body has kept aging, but some essential part of me hasn’t. I haven’t seen it in years. The least regretful version of this story’s ending: Maybe it’s back there in my fingertips, on a Friday night in 1991, moving as delicately as possible through the hair of a girl I loved. The most: It is a cheap kind of life, the one I’ve made, but a simple one — a life that only moves forward when I draw it back.

See All Posts by Kevin Brockmeier

Kevin Brockmeier is the author of eight books, including, most recently, A Few Seconds of Radiant Filmstrip: A Memoir of Seventh Grade.