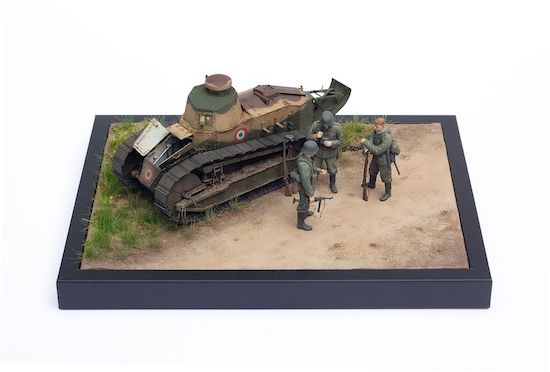 The FT17 was a WW1-vintage French tank built by Renault. Many were still in use during the German invasion of France in the spring of 1940.

I was inspired by photographs of abandoned FT17s seen along roadside during the German invasion. These scenes provided an opportunity to feature an open driver’s compartment on the model, as this particular kit provides some nice interior detail. I chose to create a vignette of the abandoned tank with a group of German infantry taking a rest from the march toward Paris. The base FT17 kit was by the manufacturer Meng and was built out-of-box.

As I was building a WW2 version of this tank, I had to do some research on markings and paint schemes of the era. I settled on the tri-tone scheme seen here for its visual interest and contrast with the French army roundel insignia. The figures are from another kit from the manufacturer Dragon. They were also built out of the box, with the addition of scratch-built gun straps made from the foil wrappers of chocolate coins. The base of the vignette was created on top of a picture frame and made from modeling putty, scale grass and tiny rocks collected from my yard.