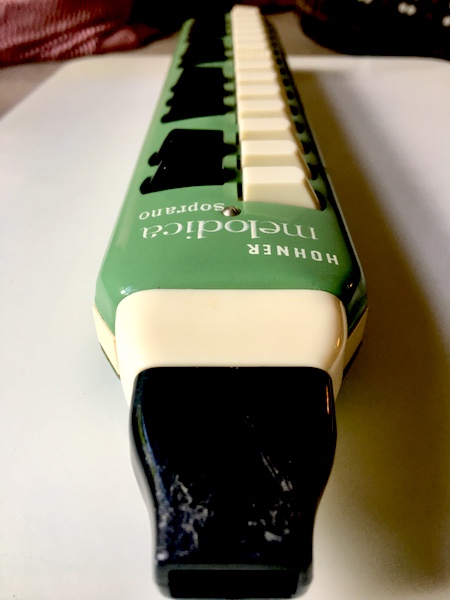 By the time I encountered the Melodica, I’d already been taking violin lessons for a few years. God, how that instrument gave me a pain. Literal scars. My fingertips were calloused from pressing on the strings; holding it up left a hickey under my chin. There was practicing — so much practicing — and still it only sounded right some of the time. And then there were the mandatory performances. In between, there was hardly anything that resembled “playing.”

Playing the Melodica, on the other hand, was like riding a tricycle across a life-sized atlas. You couldn’t get lost; you couldn’t bend or break the notes, which were limited to just two octaves and comfortably laid out in front of you. It was musical paint-by-numbers — all you had to do was press the buttons and breathe.

From the very first time I blew into one, it sounded like it was supposed to (and like it still does, more than 40 years later and five minutes ago): funky and bright, like a harmonica, with a dollop of schmaltz, like an accordion.

I still have two of them. They were Christmas presents given to my older sister and me by my grandparents, circa 1976: Hohner Melodicas, one alto and one soprano, separate but equal, intended to be just different enough to keep our chronic rivalry in check.

My sister got the alto, which at some point she left at my parents’ house, so naturally I took it. I asked her about it recently to see whether she’d noticed.

— “Didn’t Grandma and Grandpa give you one, too? Yours was…”

I was about to say “red,” but, being the bossy big sister, she finished my sentence for me:

She is 53 years old. You can see why same-but-arguably-different was a necessary gift-giving strategy.

Anyway, hers-now-mine is indeed a deep red, the same shade as my Etch-a-Sketch and our mother’s VW Bug. But mine is mint-green — the perfect hue of an idyllic 1970s youth, a color now synonymous with nostalgia itself. It was the color of our rotary phone, my grandparents’ American Tourister suitcases, and scary equipment at the dentist’s office. It was also, at one time or another, the color of everybody’s bathroom.

I still play both mine and my sister’s Melodica from time to time, when I’m bored or procrastinating or just walking around the house, even though there’s something sort of self-consciously mournful about it and one of them (hers) has a stuck key because somebody (not me) dropped a Mallo Cup crumb or something on it a long time ago.

After a while, my playing elicits repeated heavy sighs from the dog, at which point I know it’s time to put it away.

See All Posts by Cynthia Joyce

Cynthia Joyce is the editor of the anthology Please Forward. She lives in Oxford, Mississippi.