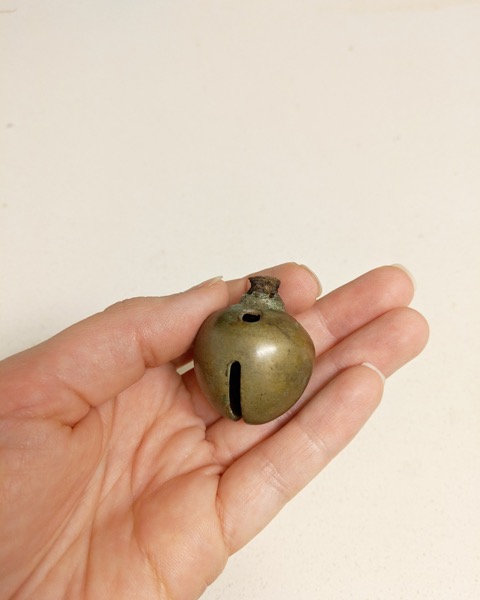 It’s 1989. A 39-year-old woman wades through mountains of unsorted items in an antique shop in northeast Texas, where antique shops are run out of converted garages. This woman is my mom. She’s looking for a Christmas gift for me. As she scans bins of vintage magazines and jars of bottle caps and coins from forgotten regimes, she begins to lose hope.

See, when I was 6 years old, I wrote a letter to Santa and asked for two gifts. One, that there would be no more litter in the world — a tall order, even for Santa — and two, a bell from Santa’s sleigh.

“Sleigh bells?” the owner says, in the kind of drawl you only hear in a 100-mile radius of the great bend of the southern Red River. “Don’t know if we have any of those things, but if we did, they’d be back over yonder.” He nods toward a corner of the store. My mom sifts through a cardboard box on the floor, labeled: “50 cents each.” She digs past a mix of decorative pins, figurines and trinkets, toward a sound — a distinct jingling — and scoops up a heavy, tarnished brass sleigh bell. It is perfect.

On Christmas morning, when I discovered a perfectly square little box with a tag that read, “From: Santa,” I knew it was the sleigh bell. Perhaps I wanted to keep a part of Santa in my pocket year-round, to be reminded of my favorite time of the year? But that’s the Hallmark card version. What I really wanted was proof. The sleigh bell could finally validate the stories I’d only heard and read in books, about this guy in a red suit who shoved himself through chimneys to give freebies to sleeping families.

Now, as an adult woman, nearing the age my mom was in 1989, the sleigh bell doesn’t remind me of Santa. When I roll it in the palm of my hand, feel its heft and hear its deep jangling tone, I think of a mother’s determination to bring joy and magic to her daughter, even if it meant digging through box after box in small-town resale shops. Objects, as it turns out, are proof. Maybe not of Santa Claus, but of the relationships between people, both those who make the object and those who give and receive it. I’ve come to find this is far more magical than the guy in the red suit could ever hope to be.

See All Posts by Chapell Ellison

Chappell Ellison is a content strategist at the Brooklyn-based digital agency Huge, a UX writing teacher at the School of Visual Arts, and the co-editor of Design for People.