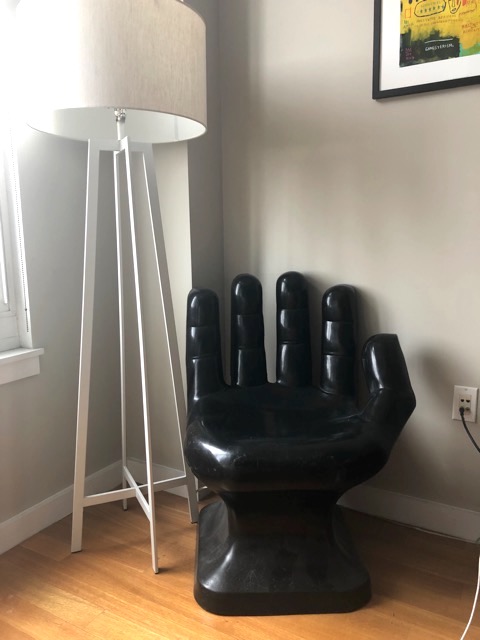 Right when I started dating my now-wife Chandler, I bought a hand chair on Craigslist for $60. It is exactly what you are picturing: A plastic chair, in the shape of a hand, where the “seat” is the palm and the backing is four fingers and a thumb.

I considered it Mod and Funky and Art Deco, while Chandler deemed it “tacky” and “weirdly dirty” and “nonfunctional as a chair, I mean seriously Jason what’s the point of owning this?”

My wife was, as she often is, correct. One cannot sit comfortably on the Hand. You cannot curl up on the Hand to watch a movie or read a book. Were we to replace the Hand with, say, a lounging chair, or a reclining chair, or any chair that is not shaped like a part of the human anatomy, our apartment would be improved.

And yet: I refuse to get rid of the Hand. I will not remove it from our apartment decor, no matter the strength of the arguments for amputation.

Partially, the reason for my stubbornness is simple: I enjoy being the owner of a Hand. When a friend visits for the first time, the comments come in two varieties: “Oh! You have a hand chair!” and “Oh… you have… a hand chair…” I like possessing a Rorschach test. I am not much of a conversationalist; it is easy to talk about the Hand in the corner of the room.

But if you were to dig deeper — and I have, because with each Crate & Barrel catalog that arrives in the mail I am forced to confront the Hand — you would find something aspirational, and a little embarrassing.

The previous owner of the Hand Chair was an energetic old artist living in a grand co-op in the West Village. She wore a bandana; I was immediately envious of her. She struck me as one of those New Yorkers who bought her enormous apartment for $6,000 back when New York was Gritty and Hip and everyone was friends with Andy Warhol.

This Artist seemed glad that I, in particular, had purchased the Hand. “I know you’ll give it a good home,” she confided, as though she were talking about a kitten and not a chair shaped like someone raising the roof.

This is the moment that doomed me. I was already projecting all sorts of embarrassing sepia-tinged fantasies of the Old New York on this woman — imagining her, fresh-faced and in overalls, sipping a beer at the Gaslight Cafe as a young Bobby Dylan strummed guitar.

I was no longer purchasing the Hand; the Hand had been entrusted to me by a woman who may as well have been Lou Reed.

Everyone arrives in New York with an image of themselves as a successful New Yorker. That image alters (or dies) based on any number of factors, including real estate prices, love, economics, the passage of time, the Siren’s Call of New Jersey, whatever. I no longer envision myself in an East Village loft, hosting “happenings,” wearing a turtleneck. But I still have my Hand Chair, don’t I?

See All Posts by Jason Gilbert

Jason O. Gilbert is a comedy writer whose work has appeared in The New Yorker's Shouts and Murmurs, McSweeney's, and The New York Times. His new book is The Mueller Report.