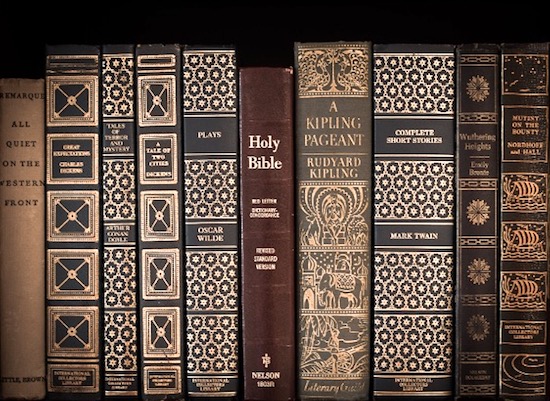 I collect books with pretty spines.

The oddball in my collection – not at all pretty – is the Holy Bible.

It was given to me at my Lutheran confirmation. As the grandson of a minister, I saw this as a truly sacred event. But for the other 9th graders, it was a pain to endure, like an overplayed Weird Al Yankovic song. At the rehearsal, the chit-chatting grew so loud that Pastor Orv bellowed “If you can’t hear my questions tomorrow, know that the answers are ‘yes!’”

But instead of rejecting religion, I doubled down, taking my soul across town to an Evangelical Free church. I accepted Jesus as my Lord and Savior and became a “soldier in God’s army.” Soon I was at the mall helping strangers avoid eternal damnation. Life was good.

Two years later, I flew to Boston for a summer academic program. I was a new-to-deodorant 16 year-old packing heat (my trusty Bible). But it wasn’t until the final week that I found Bo, a guitar-strumming, Division I hockey player and uber-cool Christian. He invited me to a bible study.

That evening, as we listened to verses from the book of Matthew, I felt like I was home again. As we wrapped up, the leader asked “How about you, Dave? Have you been baptized?”

“Interesting. Why do think Jesus chose to be baptized as an adult in the river Jordan?”

I mumbled something, but more questions followed. As more smiling faces turned my way, it dawned on me that this wasn’t a digression, the verses hadn’t been chosen at random, and that this bible study was more of a Dave study.

Soon I was agreeing I needed to baptized again.

“I’d love to attend your Sunday service at the Charles River. But my flight back to Minnesota is Thursday.”

“Dave, what if I told you we can take care of your flight and extended lodging?”

These were the most generous one-hour-friends I’d ever had.

But it was happening so fast.

I landed in Minneapolis confused. Did baptism have an age requirement? Was my come-to-Jesus moment invalid because it wasn’t wet?

My youth pastor assured me I’d run into a fringe group overly focused on a technicality.

But if they were fringe, who were we? The line between saved souls and overcooked s’more souls was getting fuzzier by the minute.

By the following year, as I chose what to pack for college, I elected to keep my bible on the shelf.

And there it stayed for twenty-five years.

But today, even as my spiritual pendulum has swung toward atheism, my bible still comes in handy. When “liberal elitist” Facebook friends mock the Trump-thumping evangelicals, I look up at my leather talisman and think “There but by the grace of God go I…”

For if not for a Bible study, I might still be a Christian.

See All Posts by Dave Boerger

Dave Boerger hails from Coon Rapids, Minnesota. He spent some time in LA writing for sitcoms like 3rd Rock From The Sun. He currently keeps his collection of pretty books in an undisclosed location somewhere in New Jersey.