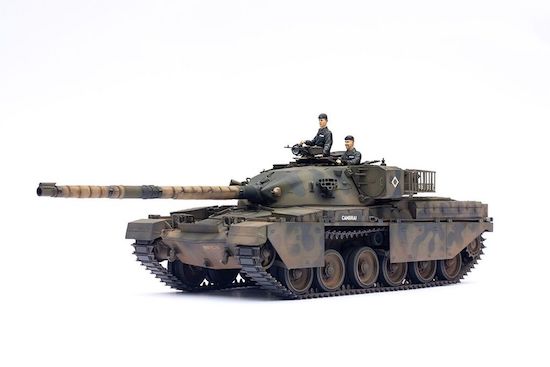 The Chieftain was the British Army’s main battle tank from the 1960s through the late 1980s. It was the first tank to feature a reclined driver’s position, which radically lowered the silhouette of the tank.

Based in Paderborn, Germany, ‘Cambrai’ was the CO’s tank of the Headquarters Squadron, 3rd Royal Tank Regiment (RTR) c. 1979–1986. This particular tank was named for the Battle of Cambrai, for which the roots of the regiment — C battalion of the 1st Tank Brigade — took part. In popular history, the Battle of Cambrai (November 1917) is considered as the first large-scale use of tanks; however, it might be more accurately described as the first use of large-scale combined arms.

The BAOR (British Army on the Rhine) camo schemes are typically thick black bands over green. I was intrigued by Cambrai’s distinctive lobed camo pattern, as it was more organic in nature – reminiscent of the circular patterned British camo of WW2, often referred to as the “Mickey Mouse” pattern. I haven’t been able to uncover any articles online about the standardization of this camo, though I did find one image of a D company Chieftain of the 3rd RTR with a similar scheme.

Figures for Cold War-era British tankers (or tankies, as the Brits refer to them) are tough to come by from commercial figure makers, so I had to be creative. The figures shown here were created using a WW2 German Panzer Crew sold by the manufacture Dragon. I noticed that WW2 Panzer crewman wore similar jumpsuits to those of the Royal Tank Corps… so, with some careful sanding, altering of arm positions, and the addition of distinctive British name badges and a set of superb Hornet heads, I created a Chieftain commander and loader.

The kit featured here is the Takom Chieftain Mk5P. Painting was completed with Tamiya paints for basecoat airbrushing, Vallejo and Testors Model Master for details, Winsor & Newton and Holbein artist oils for weathering, and Mig pigments for dust and dirt effects. Decals are a small set of custom dry transfers that I created.