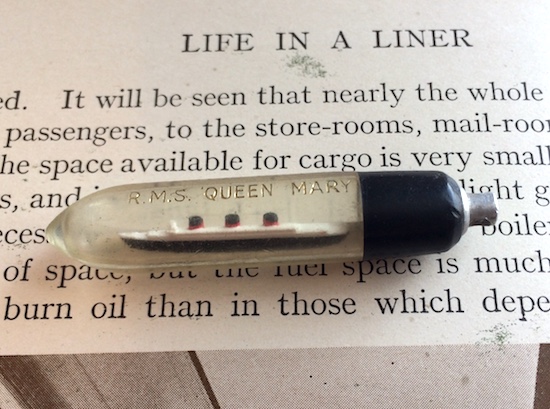 Its bullet shape lodges in a sediment of undiscarded objects. The keyring and chain are lost. The time-capsule souvenir survived. My parents were like children themselves when they showed it to us onboard. A miniature Queen Mary imagined by a five year-old boy as a world with invisible people.

Our first sight of it was at Southampton docks. The hull’s black cliff, three huge funnels above, gulls filling the air. There’s a picture of us at dinner. Mum and Dad’s eyes shine. Nigel, aged seven, seen from behind looking towards them. Me half rising from my seat, smiling at the photographer. I’m always surprised when it surfaces, never looking quite as in memory.

The Welsh village’s young schoolteachers fall in love. He goes to war, eventually captains a torpedo boat. War ends, they marry and have children, then leap into the blue — cross the Atlantic, overnight by train from Grand Central to Miami. Landing on an island of white sand, tropical seas, palm fronds. With five families interbreeding for a couple of centuries since a ship carrying puritans to America wrecked on a reef nearby.

Then three years lit by dazzling sun. Smell of hog plums, mango, decomposing guava. Children lost to the sea at night. Evangelists arriving each year by seaplane. Everybody suddenly born again. How Dad’s unfamiliar burnt cooking tasted the day Mum had to be flown to Nassau to be looked after.

They say about my generation that just when you think you’re through all the lows and highs — jobs, children, divorces, hopes and dreams — the biggest thing yet arrives as if from nowhere. Death of parents, unimaginable turmoil of bereavement, actual grief. When you say “I lost my dad” the euphemism is literal. You are there, lost, five years old in a place with no bearings. I would visit my mother at the home near the end of her life, when she couldn’t leave bed or say more than a word or two. It became a ritual, like the prelude to a story, to ask at some point “Do you remember the day we walked to Lower End?” Her eyes would open wide in amazement, then she would look at me and nod. That was the deserted part of the island, where nature was still in charge. The walk was unplanned, hazy always in memory, just the happiest time. For reasons of its own.

The walk would always reach a horizon where neither of us could see what happened next. Here it ends with the key fob diminishing to nothing. A grain of sand between numb fingers.

See All Posts by Malcolm Evans

Malcolm Evans is a traveller, writer, critic and ‘black ops semiotician’ — a pioneer in applying semiotics and cultural theory globally to the world of NDA covered commercial consultancy and brand strategy. Malcolm is UK based, dividing his home time between Brighton and his native North Wales.