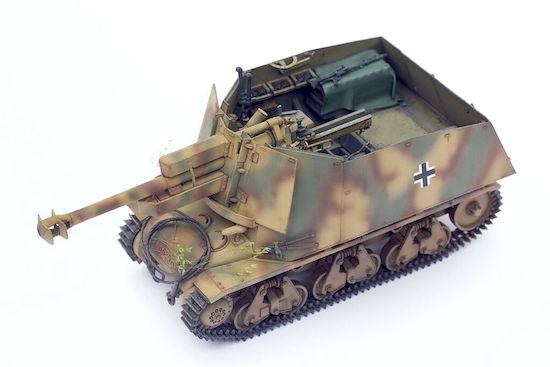 So pleasingly ugly, like a prehistoric rhino-like creature, the 10.5cm Geschutzwagon 39h (sounds like something you’d say after someone sneezes) is among my favorite of the Becker (Baukommando Becker) conversions. Becker was a German general in charge of converting captured French tanks into tank destroyers and self-propelled guns. They all had a funny look to them as they were rather hodge-podge in their appearance. I had always wanted to build one of these odd vehicles and my chance came several years back when I found this kit by the manufacturer Bronco for $20 on a table at Armorcon. What you see here spent about six years as a shelfqueen — odd fit in some areas, finicky tracks, simplified detail and lack of reference images, stalled me out time and again. Not to mention the time my cat gnawed the muzzle break off.

A couple of years ago I pushed it through to finish for Amorcon. Sometimes frustration can be a motivator — when simply calling the build “done” becomes the goal.

Built out of the box for the most part, I added a few scratch built details such as radio wiring and tarps to cover to the simplified detail on the ammo bins. I do wish I had added a figure to show off the scale — it is a rather small vehicle as it’s built on the chassis of a very small French tank, the Hotchkiss 39h. Base painting and camo was completed with Tamiya acrylics and details finished with Vallejo colors. Washes and weathering are my usual mix of artist oils and luck!