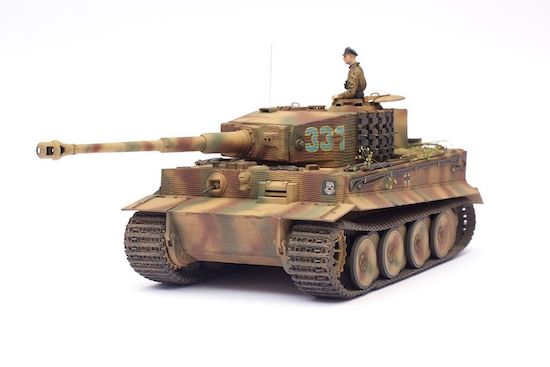 The Tiger tank is one of the most legendary German tanks of WW2. The model featured here is a mid-production Tiger I, number 331 of the 101st Heavy Tank Battalion. The 101st saw action in Normandy and fought against the British around the town Caen. I’ve always been intrigued by the 3rd company Tigers of the 101st and their blue tactical numbers. The base kit is an older kit by the manufacturer Tamiya. I picked up the kit at Armorcon (a NorthEast regional model show and competition) a couple of years ago thinking I found a bargain, but the slippery slope of aftermarket add-ons and the quest for detail eventually got the best of me and my wallet.

Bargain it was not, and while the Tamiya Tigers aren’t the most accurate or detail oriented, I enjoy making fixes when I can — I scratch built the the main tow cables and mounts, added headlamp wiring, created weld seams on the turret, thinned the fenders, affixed aftermarket tool and stowage clamps, and fastened some foliage for a bit of natural scale and contrast.

Many of the Tigers seen in Normandy carried a ceramic coating called Zimmerit. This coating protected the tank from infantry-held magnetic mines. The Zimmerit on this model is from a decal sheet by Tamiya. They’re a type of decal that has a dimensional texture. I was skeptical of these, but they worked well and I like the look and scale of the finished application. Some super-glue artistry was needed on the mantlet, but otherwise the decals went on like a charm and were pretty spot-on in terms of dimensions. The decal sheets even offer an alternate pattern of Zimmerit application for the turret which was evident in photos of the 3rd company tanks. In some areas, I carefully cut away pieces of Zimmert to replicate the wear of a tank in the field as the Zimmerit was prone to chip and crack.

This is a build of firsts — this is the first 1/35 Tiger I I’ve built in over 35+ years in the hobby, my first attempt at the German tri-color camo scheme, and the first use of Fruil tracks (metal aftermarket tracks).