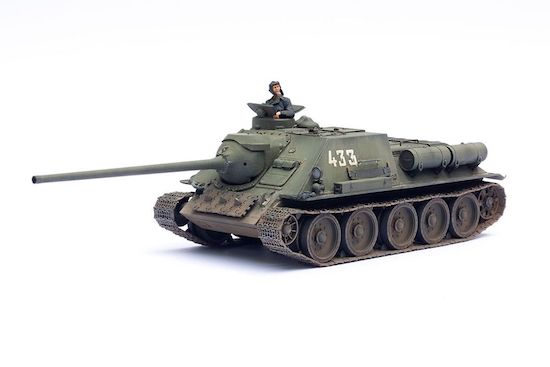 The SU-100 was a late-war Soviet tank destroyer built on the chassis of the ubiquitous T-34 tank. The SU-100 sported a large, high velocity, 100mm anti-tank gun, hence the “100” designation. The “SU” was the designation for tank destroyers.

I don’t typically gravitate toward Russian tank subjects. However, this was the last model that my grandmother gave me as a gift before she died. She used to buy me models when I was kid and even helped me build a few of them. When I got back into the hobby about 10 years ago, she surprised me with this kit during one of our last visits together. It was a fun kit to build, as I really just made a point to enjoy the process rather than get bogged down with research and aftermarket or scratch-built details.

The only alterations I made to the base kit were adding weld seams to the external fuel drums by masking a thin line of modeling putty and then sanding it to a subtle textured line. I trimmed off the fenders for a more aggressive look — old photos of wartime tanks are often seen with the fenders torn off or simply removed from wear and tear. The commander figure was added to lend a sense of human scale and to show off the length of the 100mm gun barrel — it nearly doubles the length of the tank!