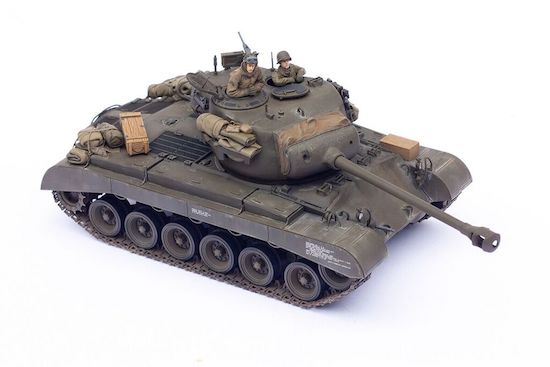 The Pershing was a late-war American tank designed to replace the Sherman. It was the first “heavy” tank produced by the United States and saw service in the final months of WW2 and through the Korean war, before being replaced by the Patton series of tanks. The model seen here depicts a Pershing during the Rhineland campaign circa February/March of 1945.

The Pershing typically had a canvas tarp affixed to the mantlet. The mantlet is usually cast metal, and mounts the gun to the turret. The tarp would protect the crew from the elements as the area around the mantlet wasn’t entirely weather sealed. I had to add one to this model, as the base kit doesn’t include one molded in styrene.

By chance, I found a mantlet with a molded-on canvas cover on ebay by a now-defunct manufacturer. However, the aftermarket mold would have put the gun at a low elevation. I think the makers were anticipating that modelers would feature the gun in the rear-facing travel lock — in the stowed position. But I wanted to show the gun facing forward, ready for action, so I needed to make some alterations to the elevation. I achieved this by cutting the molded piece with a razor saw and sanding the parts until I got a more pleasing, upward, angle to the gun mount. It took some work, but given the wrinkled nature of the canvas cover, the seam was easy to conceal and I got the angle on the gun I was looking for.

I used an epoxy sculpting material to create the stowed bedrolls on the rear deck. The commander is an aftermarket offering from one of my favorite figure makers, Alpine. The loader was a kit-provided figure; however, his head is from Alpine — because kit-provided figures too often feature soft face ad head details.

The base kit is yet another Tamiya offering. Tamiya makes very well-engineered model kits that go together without much effort, but that sometimes require aftermarket upgrades to achieve a finer look. Other updates to the model included metal aftermarket tracks, which lent a fair amount of weight to the model — it’s heavy!

This model is 4-5 years old now. Looking at it now, I might like to revisit the weathering and dirty it up a bit more — looks like it just became a shelf queen.