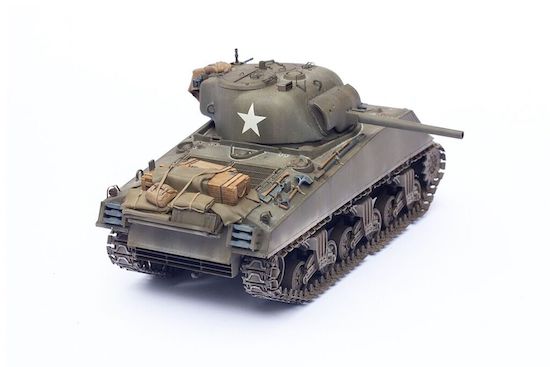 The M4A3 Sherman was a mid- to late-war production designation of the now-famous Sherman tank. The M4A3s featured Ford V8 engines, while earlier Sherman variants had either radial or diesel engines.

I built this model as a kid; I’ve written about it for Project:Object’s FOSSILS series, here at HILOBROW. This classic Sherman kit, by the manufacturer Tamiya, was state-of-the-art in the 1980s, but by today’s standards it lacks detail.

A few years ago, to bring the detail up to contemporary standards, I updated the suspension with running gear left over from a kit by the manufacturer Tascas. The tracks provided in the kit are the old-school rubber band type, so I updated them with a set of tracks by the manufacturer Panda. These tracks are assembled in a similar way to those of real tank tracks — a lot of parts, but worth the effort in the end. I replaced the 75mm gun barrel with an aftermarket turned-metal barrel. Other details were updated with photo-etch parts from my spares bin.

The Tamiya 50-caliber machine gun is soft on detail, so I modeled it in the stowed position and covered it with a “tarp” made from a fine epoxy putty. Wartime photos show Shermans in the field festooned with crew stowage, so I used the same putty to create the tarps and tie-downs over the crew stowage on the rear deck. The crew stowages are made up of parts from my spares bin.

No figures on this guy, modeled it as “buttoned up” (the hatches are closed), but it’s a classic Sherman through and through.