This article was first published in Hermenaut #15 (Summer 1999). Hermenaut was published and edited from 1991-2000 by HiLobrow cofounder Joshua Glenn. Click here to read more from Hermenaut and Hermenaut.com. 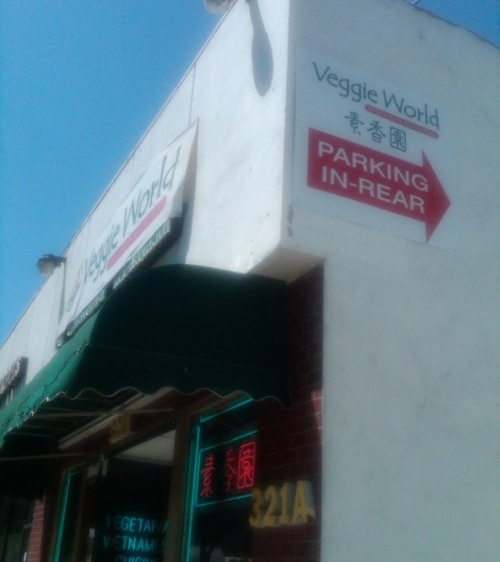 It’s just me and the kid now. There were others, earlier. There was a man in a tie, eating something that looked a lot like duck, but he left pretty quickly. And there was a woman who seemed friendly enough, but she went back to reading her book in the kitchen after watching me order. But now, with the tinny drone of canned Vietnamese music coming from above and a shy hint of incense loitering near the walls, me and the kid are the only ones here: or rather me, the kid, and two dozen silk flowers.

“Here” is Veggie World. It sounds like it should be an organic foods emporium, but it’s not. It’s a restaurant outside LA, about ten miles east of downtown as the smog drifts. “The kid” is what I call the kid who’s waiting on me this afternoon. I call him that because… well, because he’s 8 years old. His parents own Veggie World, but from all appearances they’ve asked him to run it. He greets customers, waits tables, handles the money, and wears a clip-on tie with his short-sleeved shirt. While I eat, he sits at a table in the corner and colors. 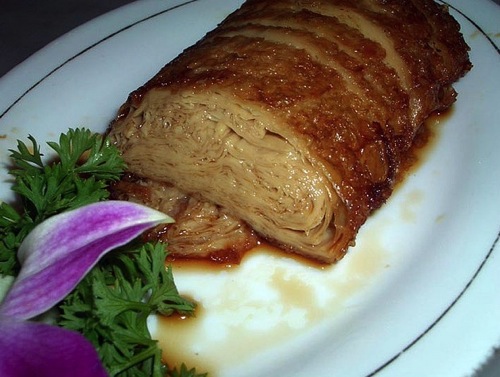 This is my second time visiting Veggie World, and both times it’s been empty. It’s surprising, given the fact that this is a strictly vegetarian establishment in Los Angeles, which seems like such a winning combo. Actually, what’s really surprising is that, technically, Veggie World isn’t even in Los Angeles. It’s in Rosemead. I had to drive clear across town — outside the city limits — in order to find a restaurant that caters exclusively to non-meat eaters. Isn’t this supposed to be the most health-obsessed place in the country? That’s the reputation, at least: sprouts, avocado, sunshine, and Muscle Beach, right? But of course, that reputation is deceptive.

Because the truth is, Veggie World is pretty much the only game in town for hardcore vegetarians. Just about every other restaurant offers something meatless — even the greasiest burger stand in LA serves Gardenburgers now — but only Veggie World allows vegetarians the luxury of being able to consider the entire menu. And yet it’s empty, and I get the feeling it’s always this way — even though it’s cheap (about five bucks a head) and located right across the street from a pretty major high school. Part of the problem is that there’s an In ‘N’ Out Burger right next door, which is pretty tough competition, especially when your restaurant’s name is “Veggie World.”

But that’s probably not really why the kid is, for all intents and purposes, my personal valet here this afternoon. Veggie World’s real problem is, unfortunately, the food. Their specialty is “meat.” Not actual meat, but more than thirty varieties of fish, beef, seafood, and bird, all made entirely from wheat gluten, rice powder, and flour. I just ordered chicken, or “chicken,” for the first time in four years; the kid swears to me that no animals will be harmed in the making of my meal. My digestive system, on the other hand, is about to take a beating. My other meal here — “beef” with mushrooms, a couple of weeks ago — occasioned some intestinal gymnastics, which weren’t horrible but which, by virtue of their existence, weren’t great either. To be frank, Veggie World’s fake meat is not that good. To be even more frank, it’s crap. 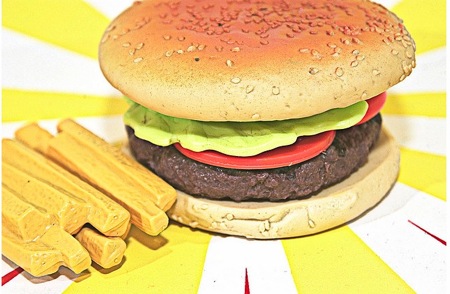 Not because it’s fake, mind you — that part’s fine with me. I love fake meat products. I eat fake salami, fake hamburgers, fake taco meat, fake eggs. On Saturday mornings, I like to fry up fake breakfast sausages to accompany my (real) coffee and, truth be told, I prefer them over actual sausages (which may or may not contain “real” meat anyway).

And though I know full well it’s fake, Veggie World’s “meat” looks fantastic, it really does. The “chicken” has sort of a crunchy skin, it’s golden and sticky, and it’s served in pieces impaled by toothpicks. This has the dual effect of simulating the serving method of real-chicken (my coinage; like real-time, get it?) dishes and replicating the biggest inconvenience of eating actual fowl: navigating the skeleton. But, as it is with so many of the starlet/waitresses running around LA, the beauty of Veggie World’s gluten chicken is only skin deep.

Despite the famously nebulous requirements for tasting “like chicken” (frogs, rabbits, McNuggets, and people, among others, have all been improbably described this way), Veggie World’s imitation chicken tastes not one whit like it’s supposed to. Actually, it tastes a lot more like beef fat than anything else: marinated beef fat, fried and served on toothpicks. You can appreciate my disappointment.

With the food, that is. Not with the place. I love Veggie World. I didn’t at first. But that’s because I was looking at it all wrong. I was looking at it as a restaurant; and as a restaurant compared to other restaurants, Veggie World is a failure, especially if you’re of the “bad food + bad atmosphere + child labor = bad restaurant” school of thought. But I found that if you just cock your head a little bit to the side, Veggie World ceases to be a simple failure and becomes a glorious, well-intentioned, sincerely realized semi-failure. They’re probably not going to print that on the front of their menus, but I mean it in the best possible way. In fact, it’s a lot like the metropolitan area it inhabits, which is another piece of semi-failed greatness, in my opinion. Hang on, I’ll get to that.

Let’s start with the kid and his family. He’s never eaten meat, he tells me, and neither have either of his parents. Ever. So why go to all this trouble to dress up gluten like it’s chicken? I happen to know of at least seven really good vegetarian recipes out there that do not call for chicken, or for meat of any kind. If they’d just rifle through a few cookbooks, they could probably get away with a whole menu of non-meat items that don’t even look like meat. Why bother creating a wholly unsatisfying substitute for something you can’t possibly crave, because you’ve never eaten it in the first place? Isn’t this like skipping heroin and going straight to methadone? 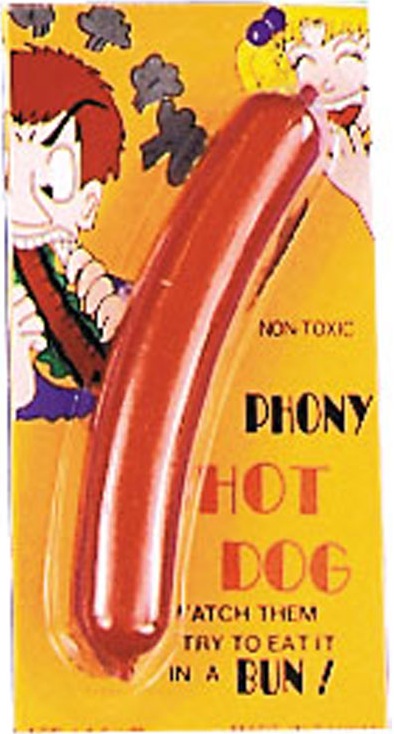 But Veggie World is so fake it’s real. It’s like a monument to artificiality: In addition to the fake shrimp, beef, chicken, fish, duck, squid, and squab — basically a small gluten bird (not to be confused with Steve Guttenberg) — there are the fake flowers, the fake plastic chopsticks, fake Coca-Cola, and the fake Charlie Chan soundtrack. There’s an odd sincerity to all this artifice. It’s fake, but it’s not phony.

My thinking is that Veggie World specializes so brazenly in counterfeits that they must be on the level. If they were trying to be sneaky, wouldn’t they just call the place Meat World? No one’s fooling anyone here, and no one’s trying to. The silk flowers, the tinny music, the “meats,” they’re all part of the show. It’s like a fantasy camp for the undiscerning vegetarian who remembers what it was once like to be a first-class citizen: an omnivore. “Surprise me, Kid! Just bring me whatever’s good today!”

People tend to make the same error in appraising Los Angeles as I initially did with Veggie World. They see the beautiful ones rolling up to the Oscars in their stretch Hummers, their fake tits wrapped in black Prada, and they assume the entire city is a hollow, gold-plated void. But again, only fools are fooled by LA. If you’re staring at a pair of anti-gravity boobs and think you’re the smart one because you figured them out, then you’re an idiot. Come on, Rube — that stuff’s for the tourists. This city is definitely gold-plated, but it’s not hollow. Get past all that sheen and LA’s the city of Raymond Chandler and Charles Bukowski, of X and Black Flag and Tom Waits and the Minutemen and Charles Mingus and, well, CHiPS. It’s the city America loves to beat on, and yet it’s the city they all move to — 14 million locals and growing. I guess that’s the one thing that sets LA apart from Veggie World: It’s crowded.

Actually, Veggie World does have something on the menu that’s not completely fake, something called menthol juice. I ordered it because I thought it was some kind of cigarette substitute. (That would be appropriate, of course, especially in light of California’s ban on smoking anywhere, ever.) As it turns out, menthol juice is a chilled, greenish beverage made from — get this — actual mint leaves. It’s totally organic, and totally real. And you know what?

It sucks too. Save your money.

See All Posts by Dan Reines

Dan Reines is a writer living on the grassy outskirts of Los Angeles, California.