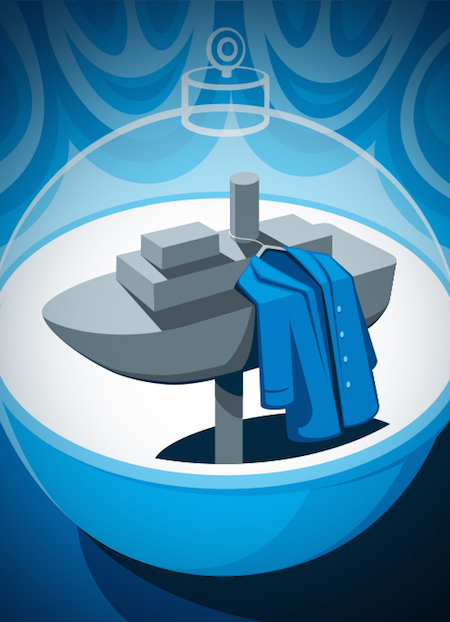 I don’t know what it was. It came briefly into my possession at my nursery school, which was housed in an enormous Tudor-style building that had once been someone’s mansion. There was a Christmas tree in the cavernous foyer of the school and I plucked it — this thing I will try to describe — off a branch of that tree. Maybe my teacher, whose name I forget, had put it there for me, or for someone. It was spherical and opalescent. I held it in my hand and looked at it. Inside of it was my sister, in miniature, putting on her winter coat, in a kindergarten classroom on the second floor of the former mansion whose first-floor foyer I was standing in.

“Scrying,” says Wikipedia, “is the practice of looking into a suitable medium in the hope of detecting significant messages or visions. The objective might be personal guidance, prophecy, revelation…” I don’t recall having an objective when I looked into the thing and detected the vision of my sister, and I can’t say what message, guidance, prophecy, or revelation that vision conveyed. I can say the seemingly mundane vision felt thrilling and magical to the little boy who may already have been absorbing at home and at school an understanding of the world wherein if one’s sister is putting on her coat in a different room on a different floor of a building, one should not be able to see her. I liked telling her I’d seen her inside the spherical thing, and hearing her excitedly confirm that she had been putting on her coat at the very moment I’d scried her doing so.

I put the thing in my pocket and brought it home with me — or believed or wished I had when I looked for it in my house a while later. I found something I thought might have been it: a translucent plastic bubble whose two halves you could separate by screwing them apart. I looked into the bubble hoping to detect a significant message or vision. I detected a small gray lump of plastic molded in the shape of a battleship, which induced in me feelings of discouragement and ordinariness.

If you were to tell me what I saw that day at school was just the reflection of a kid standing behind me, putting on her coat, I would say, How uninteresting. Life is short and full of suffering. Death is certain and its meaning is not. I used to be troubled by having lost the spherical thing, or by its having lost its magic. Lately I am inclined to be grateful I was ever a vessel or instrument for that initial thrilling vision.

One evening some years later, after the nursery school had gone bankrupt and the building had been abandoned, it burned down. A crowd of us from the neighborhood came out after dinner and watched the fire from the safety of a perimeter fence. Each time a charred piece of the school broke off, fell to the ground, and sent a thick swarm of bright sparks up into the dark air, we cried out in delight.

ABOUT THE ARTIST: Glenn Jones is a freelance graphic designer and illustrator from Auckland New Zealand. A former creative director, Glenn found internet fame in the mid-2000s with his quirky Tshirt designs that lead to the creation of his own US based brand Glennz Tees.