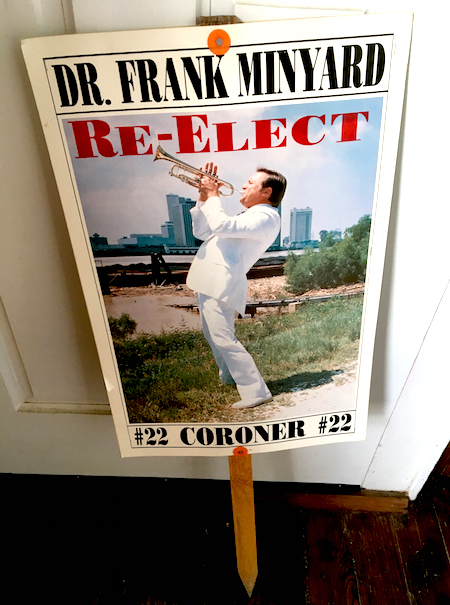 The way I remember it, we already knew we would be moving away from New Orleans when I convinced E to jump out of the car and pluck a political-campaign sign out of the ground. E, my wife, can’t confirm the timing, but she will gleefully tell you, a total stranger, that the rest is true and that I was too chicken to snag the sign myself — even though there was nobody around, and given that the election was over the thing was essentially trash.

Maybe so. But I take credit for recognizing the sign’s must-have status, and for keeping it in presentable condition for close to 15 years and three interstate moves. Surely you can see the attraction: It’s hilarious. What kind of man advertises his fitness for public office — for coroner — by way of an image of himself in a white suit, blowing trumpet in such a weirdly shabby corner of a wildly photogenic city? New Orleans has no trouble generating physical artifacts of its distinct culture (we’ve hauled piles of Mardi Gras throws around the country, too), but somehow this sign seemed to capture the fundamentally baffling nature of the place.

In the early 2000s, when we acquired it, Frank Minyard was already a New Orleans institution of sorts. He won his first coroner election in 1973, quickly became a public figure (yes, he was in a band), and rarely faced serious electoral opposition. Louisiana has a famously dark sense of humor about its history of sorry politics, a looping soundtrack of laughter and breaking hearts, invariably summarized by invoking the bumper stickers promoting the dubious Edwin Edwards for governor, over noxious KKK veteran David Duke: “Vote For the Crook. It’s Important.” Heh. In its way, the sign captures that, too.

So I imagined it would be a perfect prop to bedazzle incredulous Yankees, and maybe it even served that function, before Katrina. But after (federal) levees and floodwalls failed miserably to live up to their (federal) promise and left more than a thousand dead in New Orleans, I lost interest in whipping up yuks about the city that care forgot. Minyard had a cameo role in the catastrophe’s aftermath, which among other things included excruciatingly un-funny coroner decisions about causes of death in some murky and possibly scandalous circumstances. But that’s another story. The point is, the sign migrated out of view.

More recently, we ended up moving back to New Orleans. Minyard, after 40 years and 10 elections, had just retired, at the age of 84. The city his campaign sign represented for me is long gone, except in the ways that it isn’t. I’m learning all over again how to be baffled by New Orleans and its politics, properly. I’ll keep the sign, though. It’s in a closet. Visitors rarely see it, but I do, every day.