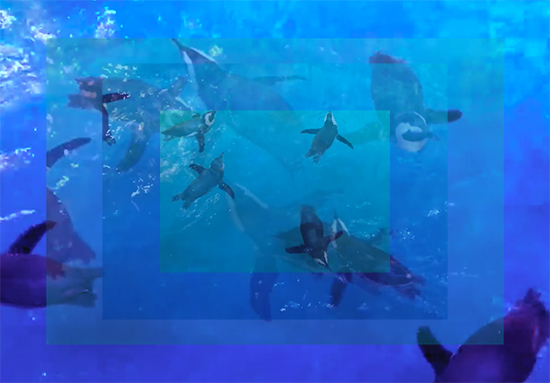 In the New England Aquarium, lapidary creatures dart and flash in tanks that loom out of Brutalist shadows. Inhabitants of the penguin exhibit, where I spent six months as a volunteer keeper, by contrast subsist in open air, in a pool containing some 500,000 gallons of seawater pumped in from Boston Harbor. The Aquarium is like a ship turned inside out, its systems engineered to keep an ocean on the inside. Though traversed by herds of footsore tourists, for penguins and keepers it’s a risky space, cold and uncomfortable, demanding constant effort and attention; reaching for a dead fish floating in the water, you might get bitten.

Dozens of African, Southern Rockhopper, and Little Blue penguins live in the exhibit, each species in a fenced-off realm of its own. These species hail from temperate latitudes in the southern hemisphere, far from Antarctic ice. They roost on hollow fiberglass islands modeled to look like rocky seamounts, plumbed with sprinklers that blossom sprays of fresh water each morning. In the galleries above, interpretive signage emphasizes ocean conservation and penguin behavior; wall-mounted maps indicate the far-flung islands where colonies roost. But the archipelago that Aquarium penguins occupy is stranger than any mapped there: floe-free, an ecological niche lit like a sound stage, where wetsuit-wearing workers serve as food web and weather.

Not all of the exhibit’s inhabitants are warm-blooded. The tray also is home to garden hoses, for washing down the fiberglass islands, and for herding birds as well. Other species visible on exhibit include scrub brushes and scouring pads, for removing guano and undigested fish from the islands and scrubbing away algal film; these we tuck under wetsuit hems, where the birds snap at them, testing their quality. And if you look fast during our cleaning bouts, you can glimpse great quantities of Virkon, a veterinary disinfectant the color of Gatorade, foaming on the fiberglass islands and swirling into the waters. You’ll also see numerous buckets–not for cleaning, but for portioning out and conveying food to the birds, in twice-daily public feedings that bracket the hours of cleaning work.

As the Aquarium opens, wetsuit-clad keepers already move with purpose as the shadows of visitors shift in the galleries above. I enter the exhibit and ease down the ladder, cold water shooting through neoprene creases. Rockhoppers, stolid and squat atop their island, regard me with feline indifference, basting themselves in the gush of chilled air that stirs their flamboyant eyebrow fringes. Slipping through a submerged gate into the Africans’ waters, however, I am met by a boisterous, bobbing flock of floating birds, who conduct a darting inspection for food. I’m ferrying a portion of the morning feed across the exhibit, and the birds know the bucket well. As I set off on a lunar hop through chest-deep water, the penguins assemble in escort, some cresting the current ahead while others draft behind. Vital in buoyancy, the birds wheel and shift direction with the merest tail-flicks; in a flash, one will shoot beneath the surface and come up porpoising, hurtling over the water at the speed of flight. A juvenile crests along at my elbow, idling and issuing low, plaintive croaks wherever I stop to shift my hold on the unwieldy bucket.

When feeding commences, the penguins crowd out of the water onto their islands, jostling for position. We bob midriff-deep while birds queue on the islands’ rough edges, looking down at us. Each fish we present according to a strict protocol: dipped in seawater for a final cleanse and offered headfirst, on its side, dorsal fin to the right. Birds shoulder into each other, falling into the water with frantic plops. They knick our fingers with their quick, eager beaks, which gape to reveal maws crowded with the spiky growths, called papillae, that guide fish down the gullet. The feed is rapid, riotous, intense—and yet we take time to count the fish each bird ingests, tallying them up in pencil on plastic boards. Back in the office, we will transfer these numbers to paper log sheets, compiling a strict metabolic accounting of each bird through what might be its thirty-year life in the exhibit. Scribbling frantically, identifying each bird by the colored plastic band it wears on its wing, I catch a glimpse of the gallery above: visitors throng the railings, leaning out over the water to watch our work.

Exhibit protocols are meant to preserve a kind of wildness in the penguins: to treat them as free creatures and not pets, minimizing baby talk and eschewing the training of elaborate behaviors. Despite this imposed wildness among birds who never see the sun, there is discipline here: when feeding, we’re instructed to skip any penguin that bites another. They don’t lose place for biting us, however.

After our own lunch, it’s time to replenish the food supply for the penguins. In the prep room, we ready the morning’s now-empty food trays with a vigorous bout of cleaning; constellations of roe and ice and scales swirl down the drains. We retrieve boxes of smelt from the freezer, slitting open the tops with big, bright-handled knives, like those found on fishing vessels. Thumb-sized smelts with surprise in their eyes clatter like xylophone keys as they tumble into trays. In stark contrast to the carefully gathered and intensively bred creatures of the Aquarium’s collection, the feedfish are commodities, packed in boxes emblazoned with the logos of suppliers from around the globe, stacked on pallets and shrink-wrapped, patinated by frost. Beyond the bright exhibit, fishing trawlers, air-shippers, veterinarians—and, invisible and faraway, vast schools of baitfish and krill—comprise the dark waters of the exhibit’s dappled archipelago.

“Animals came from over the horizon,” John Berger observes. “They belonged both there and here.” Penguins, certainly, come from over our horizon; their familiarity in contemporary pop culture, and their popularity in zoos and aquaria, is striking given how little contact many penguin species had with humans before the colonial era. This is not to say that there were no such contacts before the time of Cook and Ross, before men from the North came in filthy ships to club them and steal their eggs. The original name for the Little Blue penguin, in the Maori, is Kororā; the Tawaki, or Fiordland penguin, a pigeon-sized bird crested with bolts of bright yellow, shares its name with a god who garbed himself in lightning. Penguins first arrive in the North, however, as part of that over-the-horizon eruption of “discovery.” Lacking that fear of humans borne by boreal creatures, they come as if from a long separation, unaware of all that we have wrought. Surely, this winning disposition contributes to their modern role as the clan totem of quality paperbacks and open-source software.

Only they don’t come to us, of course. They are brought.