Before he was called up to captain the Enterprise, then-lieutenant James T. Kirk was taking a much-needed rest break on Earth. Wounded in battle by Klingon phaser fire, Kirk was furloughed to Big Sur to recuperate from his wounds and prepare his shoulders for the mantle of command, which he felt was due to drape itself around them very soon. 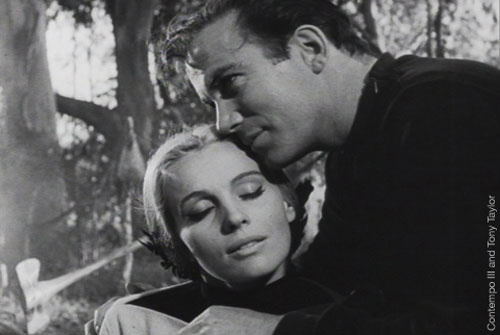 In Big Sur he found a modern-day Sherwood Forest, where a casual assortment of Luddites had taken up residence and ranching in abandoned Missions and primitive wooden shacks. It was a simple, yet good life: clean air, fine weather, magic healing waters, a William Jamesian semi-incestuous relationship with his sister . . . fine for the unburdened soul to feel the pure joy of being alive. 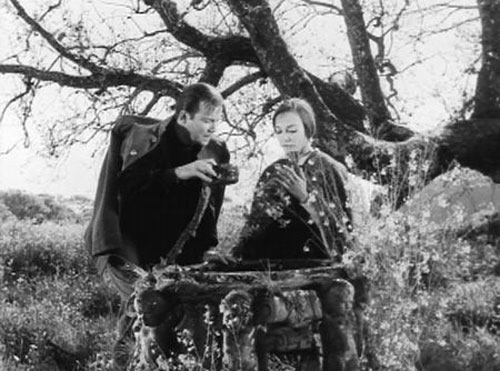 Unfortunately, just down the coast there lived a commune of blond black-wearing soulless demons, who had fled Sweden to escape the micro-management of the Incubus — none other than the Lord of Darkness himself, Ingmar Bergman — but still continued doing his bidding on Earth as contractors. These demons, or succubi, would lure hapless, fallen men to the ocean by hypnotizing them with their promise of secret art-film depths and delights. However, upon reaching the ocean (symbol alert!) the man would stumble in the waves, whereupon the succubus would step on his head. This would allow the Dark Lord to capture the man’s tainted soul, which he undoubtedly needed to populate his upcoming films. 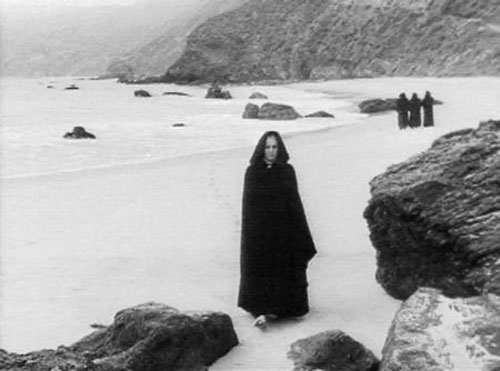 Apparently this became a little dull for the demons, and influenced by the California creed of self-expression, one of them decided to express herself with the challenge of luring a truly noble man to his death. Thus the danger to our captain.

But ever-resourceful Kirk has a secret weapon: love. If the succubus falls in love with him she will be unable to do the Dark Lord’s bidding. Of course Kirk doesn’t know this, and doesn’t know that Kia, the wayward succubus who shows up at his doorstep one day, is not mortal and has no soul. After a few minutes of awkward banter, they fall in love under a conveniently-timed eclipse (that’s eclipso in Esperanto).

Did I mention this was in Esperanto?

Don’t worry, there are English subtitles! Well anyway, after that, Kia the succubus can’t really steal souls anymore and basically has to go on workman’s comp. Her temp agency is not amused. The other succubi decide to raise the Incubus himself to take care of a clearly escalating situation. If one succubus can fall in love, what’s to prevent it from spreading to the entire workforce? Their organization would fold faster than you can say vaporware. So late one night they perform the ritual to raise the Incubus, who obliges by emerging out of the lawn. The Big Guy has been told to incarnate as a young man, because how they’re going to stop Kirk and reclaim Kia is for the Incubus to go after the sister, who of course has been superseded in her brother’s affections and has nothing better to do.

So the Incubus lurches out of the ground and after they wipe the mud and dandelions off his face they realize he looks exactly like . . . George W. Bush!  No one has the courage to break the news to the Incubus about his unfortunate contemporary resemblance, so the sister is conveniently blinded by the eclipse (um, eclipso) so she won’t make the Jerry Seinfeld face when he shows up to seduce her. 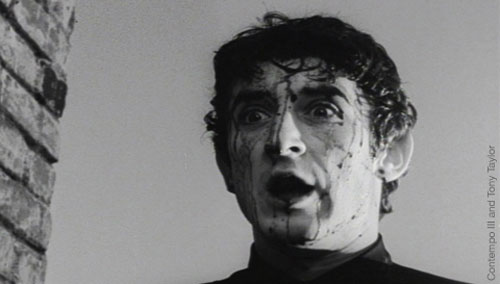 This goes off without a hitch, which is good as we’re already at least 90 minutes into the movie and there really haven’t been any action scenes since that first redshirt got his head stepped on in the beginning. The Incubus seduces the sister and lures her to his big gothic house where the succubi hold the sister down so he can kill her by giving her head. And just in case anybody misses the point, a Special Effect is helpfully provided: a fast-motion close-up of his flickering tongue closing in on the, um, camera.

Well, there are probably worse ways to go.

Meanwhile Kia is leading Kirk on a midnight ramble while she struggles with her work ethic — lure him to the beach and step on his head, or subvert the System in a personal gesture of defiance and drop out to live in peace, harmony and love.

Of course they’ve already offed the sister, so it’s not too harmonious or anything right about now. Kirk discovers this and challenges the Incubus to a fight (Pon farr! Fight to the death!), where he kills the Demon of Darkness by sticking a stick in him. (It’s not really clear how that is supposed to work.)

And anyway the Incubus is only faking and is not really dead, since he was never really alive, either. He’s undead, Jim! But apparently now, since he thinks he has killed, Kirk’s soul is tainted and the Incubus can use him. (Although of course he already had killed, being a soldier home recovering from battle wounds, but never mind about that.) But Kia loses heart and won’t help, and post-fight Kirk manages to crawl (he always did have amazing resilience) to the local Mission, where he pants on the floor in a very picturesque-Kirk-panting kind of way and mulls over the meaning of purgatory, or something like that. 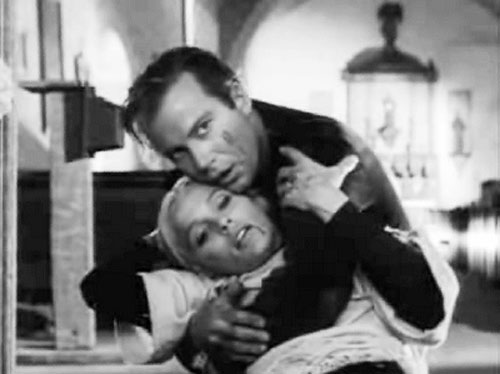 The Incubus then tries to prevent Kia from going over to the other side. She runs and gets as far as the Mission door when the Incubus catches up and a struggle ensues. The struggle is a little casual and uncertain of motive, but then the Incubus changes into a giant black goat, and we’re shown a close-up of his tongue. Flickering.

But Kia heeds Kirk’s exhortations and heaves the goat off, managing to crawl nearer to the Mission door, where Kirk reaches her and pulls her into the sanctuary of the church. Then the cinematographer solarizes the goat.

The Incubus, disgusted with the performance of his U.S. subsidiary, catches the redeye back to Sweden. Kirk cannot get over his resentment about Kia’s involvement with his sister’s death, and when the Enterprise calls him up with an assignment to go where no man has gone before, he doesn’t think twice before beaming aboard, where he embarks on a career of breaking every soft-focus heart in the galaxy in some kind of protracted, projected scheme of revenge. Bergman would be so proud! Kia, being heartbroken yet soulless, and also immortal, is left without gainful employment, and decides to become a Bay Area performance artist whose work undermines a gendered reading of negative space. The Esperanto scholars will observe that no one in the movie pronounces the language correctly.

This essay is adapted from a March 2001 review of Incubus in OtherZine, the companion journal to Other Cinema, promoting experimental film, video, and performance in San Francisco.