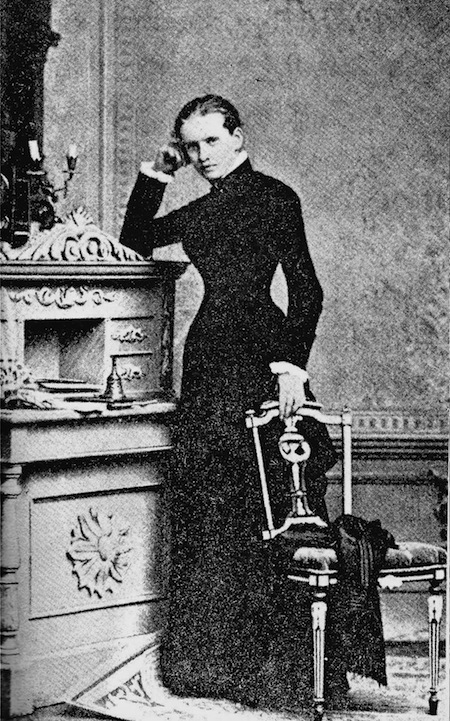 LOU ANDREAS-SALOMÉ (Louise von Salomé, 1861–1937) had a knack for winding up on the wrong side of the cultural debates of the 20th century. Worse, it’s nearly impossible to see her, today, except via the distorted perspective of her genius admirers. True, Andreas-Salomé was the great love of Nietzsche’s life. Much more important, however, is the fact that the two of them spent months together discussing philosophy; she brilliantly challenged Nietzsche at every point to articulate his mature philosophy, and was formative in its creation. You may already know that Andreas-Salomé was one of Freud’s most respected correspondents, but did you know that her work on female sexuality preceded his — and that, at the time of their meeting, she was far more famous than he (because of her career as a popular novelist)? And of Andreas-Salomé’s relationship with Rilke, what is there to say that Rilke hasn’t already said better, in one of the greatest love poems in any language, “To Lou Andreas-Salomé”:

As one puts a handkerchief before pent-in-breath —
no: as one presses it against a wound
out of which the whole of life, in a single gush,
wants to stream, I held you to me: I saw you
turn red from me. How could anyone express
what took place between us? We made up for everything
there was never time for. I matured strangely
in every impulse of unperformed youth,
and you, love, had wildest childhood over my heart.

She was the wrong kind of feminist, the wrong kind of novelist, and (along with Freud’s) her pioneering work in psychoanalysis is fading away in our era of neuroscience. There aren’t many today who acknowledge Andreas-Salomé as a forebear, or champion her work. Which is a shame!

READ MORE about Nietzsche and Andreas-Salomé, and their abortive Argonaut Folly.

On his or her birthday, HiLobrow irregularly pays tribute to one of our high-, low-, no-, or hilobrow heroes. Also born this date: Charles Darwin, David Graeber, Marie Vassilieff.