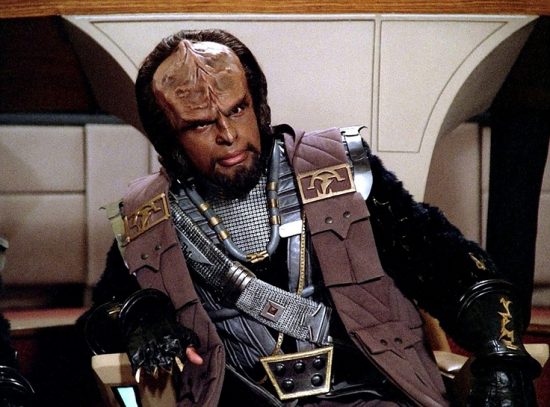 The stellar weather was awful, and ships were flocking to Deep Space Nine to ride out the storm near a repair facility. Mostly they were small merchantmen and freighters; there were one or two yachts, with daring ex-Starfleet captains who didn’t mind skirting politically dicey space on a cruise.

Commander Worf was unworried by these familiar vessels. From aboard the Defiant he could see that even the smallest solar sailers were keeping good order as they docked or were assigned orbital positions. What concerned him were the two great warships that had appeared, one Cardassian and one Klingon, dwarfing all the other traffic and even the Defiant herself. Technically speaking, neither the Klingons nor the Cardassians were enemies to the Federation. Technically speaking.

The viewscreen blinked to alert Worf that one of the large ships was firing its impulse engines. “The Cardassians are making an approach to the station,” Worf reported. “Deep Space Nine, do you copy?”

“I copy.” Major Kira’s voice came crackly over the comm. “This ion storm is really messing with your voice, Worf, can you—”

Both fell silent. There was a frisson of static. It was difficult to determine whether Kira was about to speak, Worf reflected, without visuals. Ought he to take the initiative? Was Kira his superior officer? It was hard to determine, with the Bajoran and Starfleet systems of rank imperfectly aligned. But if he were the superior officer, he ought to speak first…

“No. I interrupted you,” Worf said. It would not do to insult the dignity of Bajor by speaking over their representative on the station.

“No, you — oh whatever. I was just saying, can you boost the signal any more? You’re really faint.”

“And I was saying that,” Worf glanced over at Dax, who shook her head, “there seems to be no way to improve the audio quality. However, you are completely intelligible to us.”

“Intelligible and intelligent!” Kira quipped in her inimitable cheerful way. “Okay, Captain Sisko’s on his way, but in the meantime, what have we got?”

“Heavy hitters. And you haven’t heard anything from either of them?”

“It’s the storm,” Dax offered, but Deep Space Nine had been abruptly disconnected. She shook her head. “I hope we get them back soon. I’m definitely getting better readings from here on the Defiant than when I was on the station, but the Cardassians and the Klingons still too far away to hear. No, wait a minute. Here’s the Cardassians coming in range now.” She tapped away at her panel.

WHOOP. WHOOP. WHOOP. The bridge of the Defiant was filled with the unignorable sound of a Red Alert. Worf reflexively rose in his chair, lips peeling back in a snarl, before his conscious mind kicked in. It wasn’t the same pitch or tone as a Starfleet Red Alert, which meant…

The fuzzy image of a grey-skinned Cardassian Gul appeared on the viewscreen. “My apologies,” he said, raising his voice to be heard above the din. “It is our policy to maintain, well, alertness when we are on alert. The noise, we find, helps remind us of the dire situation. And it is a dire situation — or did you not observe that Klingon heavy cruiser in your space?”

Worf clenched his fists. It would do no good to curse at a Cardassian, he knew, but the sound was worse than a herd of tribbles. “Regardless of tradition,” he ground out, “when we are speaking we are not fighting. Therefore your alert is unnecessary.”

“We appear to have a difference of opinion,” the Gul said. His image resolved as the ship came closer: Worf recognized him as Marratt, an officer more known for his romantic conquests than for his battle prowess.

“At least mute yourself when you’re not talking!” Dax begged, hands over her ears. Worf could not bring himself to reprimand her for making a sensible, if out-of-turn, request.

A sudden crackle of static, loud enough to be audible even over the whooping, announced that Deep Space Nine was on comms again as well. “Oh my God what is that,” Major Kira blurted.

“Major!” Sisko was using his most commanding voice. “Belay your comments. Now. Worf. What in the world is that noise?”

“I believe it is our alert siren,” Gul Marratt cut in. “Our policy is —”

“I don’t care what your policy is,” Sisko said, “you will make it stop or you will leave my space!”

“I’m working on it!” Dax wailed. “It’s not that simple, actually, because of the frequencies we need… oh great. And here are the Klingons.”

“qaStaH nuq jay’! What is the meaning of this din?” the Klingon commander shouted. “We come to Federation space in peace, as the Federation wishes, wishing only to weather a storm, and our ears are assaulted by this… this…” If his swarthy face could have turned purple, it would have.

“By the alarm that you set off by warping into the system,” Gul Marratt observed.

“We bear no responsibility for the overreactions of a cowering Cardassian petaQ!”

“Gentlemen! I will have civility in my space!” Sisko shouted. “Now! This —” but whatever this was, Worf never found out. The bridge was plunged into complete and total silence. His ears nearly rang with it.

Worf whirled in the command chair. “You… hung up on them?”

“Well, it’s not like they can’t call back,” she hedged, putting her hands in her lap and scooting away from the console. “I meant to do it while Gul Marratt was talking, but it took longer than I thought to save all the settings. They’ll be back in a moment when they figure out what happened.”

It was very pleasant on the bridge when there was no whooping alarm, no crackle of static, and no rival captains shouting about their honor.

“Upon reflection,” Worf said, “you have done well, Dax. I believe I will institute a policy: No further conference calls on the Defiant.”