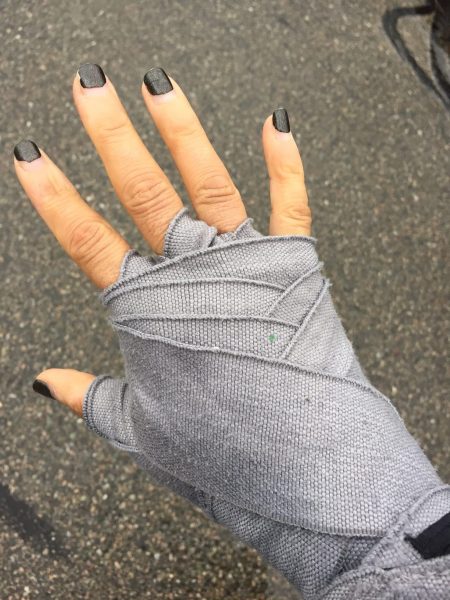 I didn’t think much about it when I was young, but watching my mother and my aunts dress themselves in saris was an extraordinary experience. In a few swift moves, they would transform nine yards of fabric into a full-body garment, with a floor-length ‘skirt’, a graceful drape of material across their torso and over their shoulder, and neatly-spaced pleats at the waist that both added swing and took up any extra fabric. Whether it was a plain cotton sari for housekeeping, or a gorgeous brocaded silk affair for a wedding, the speed and grace with which they turned unwieldy cloth into flowing apparel was the product of a lifetime of experience.

On the few occasions when I’ve put on a sari for a wedding, even when I thought I did a good job, an ‘aunty’ (including once, memorably, a complete stranger) has shaken her head and clucked her tongue at my inexpert efforts, then taken me back to a dressing area, unwrapped me, and retied the sari to her own satisfaction.

Without daily practice, I’m never going to be able to put on a sari well enough to wear out in public, much less to do so with the ease and mastery that the older women in my family display. But I recently realized that a small ritual of my own is improbably resonant.

Most mornings, I get up at six am and head to my boxing gym. Before pulling on my gloves to step into the ring, I wrap each hand carefully with a six-foot length of soft cotton strip, to brace and protect the delicate bones — the hands account for more than a quarter of all the bones in the body — from impact. After much practice, I now go through the process nearly automatically: winding the fabric around my hand, through my fingers, around my wrist, and finally smoothing down the fastener patch.

Handwraps and saris couldn’t be more different, but this habitual act of turning a length of material into a garment is an echo of my foremothers in their saris. But while clothing is often metaphorically described as armor, this armor is entirely literal.