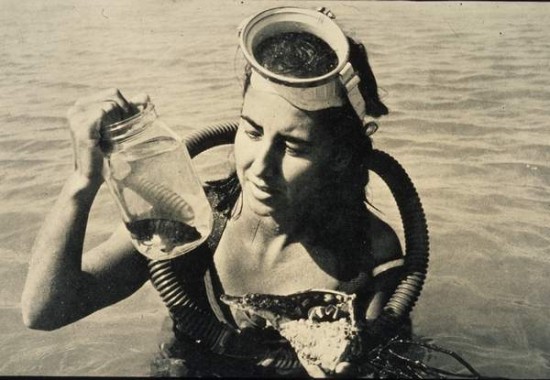 As a child, ichthyologist EUGENIE CLARK (born 1922), used to go to the Battery Park Aquarium (now the New York Aquarium), press her face up to the glass, and imagine herself in the water with the fishes. In 1949, she went on her first extended research trip as part of her doctoral graduate work at NYU, heading to Micronesia under the aegis of the Office of Naval Research to study the mating behavior of fish across the region. After getting her doctorate, she wrote about her experiences in her first book for a general audience, Lady With A Spear (1953). It was read by one Mrs. William Vanderbilt who, together with her husband and brother-in-law Alfred, decided to start a marine lab in Cape Haze, Florida, with Clark as founding director. Initially, it was just Clark and her assistant, Beryl Chadwick, in a one-room lab equipped with facilities for fish, but not humans (the restrooms were half a mile down the road). But no matter what, the research continued: Chadwick describes Clark as diving while pregnant with one of her four children, “as round as a puffer fish.” While Clark’s research specialties include the plectognaths (an incredibly diverse order which includes triggerfishes, boxfishes, pufferfish, and giant ocean sunfishes), she’s certainly better known for her research with sharks, which she wrote up in her book The Lady and the Sharks. Now a Professor Emerita at the University of Maryland College Park, Clark has spent a lifetime doing and sharing what she dreamt of as a child.

On his or her birthday, HiLobrow irregularly pays tribute to one of our high-, low-, no-, or hilobrow heroes. Also born this date: Jane Jacobs, Keith Haring.