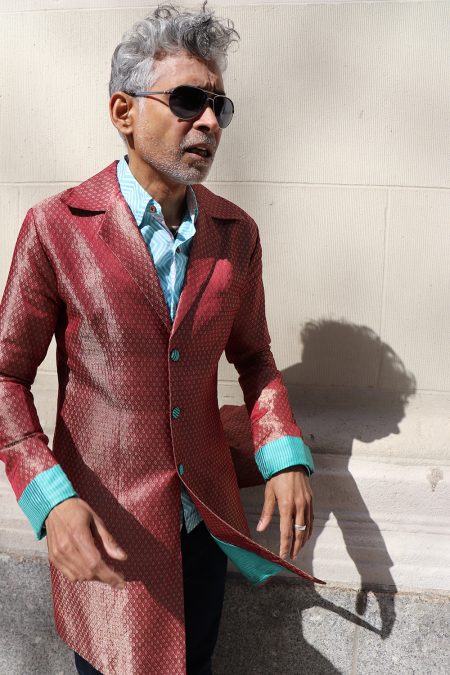 It’s a jacket. It’s long — down to my knees — with lapels, as in a suit. Its principal effect is a ruby-red and gold shimmer, which comes from the intricate brocade all over its surface. The red silk is handwoven in Benares, a city whose traditions of opulent, heavily ornamented saris have been legend since at least the time of the Mughal courts of the 16th century. The brocade — thousands of tiny leaves set inside a crisscrossing diamond pattern — is gold thread.

Three sharp blue accents, in the form of circular buttons running down the front, punctuate this expanse of red-gold. The buttons are covered in printed silk and at each edge of the jacket’s three-quarter-length sleeves are 2-inch bands of the same material, its electric turquoise plucked from an image of the famous mosque in Isfahan.

The pattern — a simple two-color stripe — is hand-printed at my parents’ studio. They are textile designers and experts in woodblock printing and it is of no little consternation to them that of the thousands of original and exceptional designs that constitute their life’s work, I chose this most banal of examples for my jacket. No matter: the blue silk struts out from inside and from the discreetly cut side pockets as well, for it is the lining for the entire piece and if you were to watch me walk away, the last visible color will be a band of blue piercing across my shoulder, where the front and back panels meet.

Juli Raja designed it. I had some ideas for what I wanted but no one else knows me as well or has the same precise understanding (or love) of glamor and craftsmanship in quite the same combination to have undertaken this job.

One finds Vien Singh, the man who tailored these ideas into form, after many referrals and much asking around, in a crumbling 19th-century Calcutta mansion, up six floors via a hand-cranked elevator. There, surrounded by a small army of tailors and assorted helpers, this fabulously exuberant man conjures up, in a spirit of joyous, infectious collaboration, whatever extravagance your imagination can dream up.

I wore the jacket most recently while celebrating the 45th anniversary of my parents’ design studio. That night we were on stage, Juli and I, holding hands and walking a runway, two of many fans, celebrities, and customers celebrating this couple’s extraordinary achievements. And while that night didn’t belong to us, for that brief spotlit moment the jacket allowed me to revel in one of my deepest secret fantasies: the one where I am Prince, onstage. Not a prince, mind you; Prince. And while not a lifetime’s worth of painstakingly handmade, hand-tailored, custom-fitted clothes can come close to touching the purple one’s unending swagger, at that moment, under those lights, I got a fleeting taste. 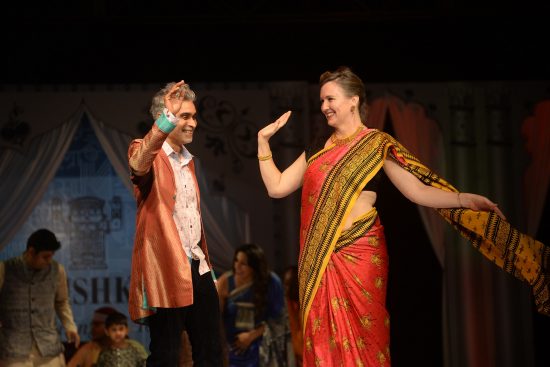 See All Posts by Kanishka Raja

Kanishka Raja is an artist in the picture-making business. He was born in Kolkata, lives in New York and is married, fortunately, to the menswear and print designer Juli Raja.