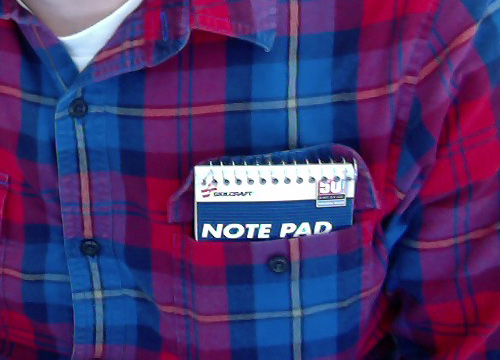 For years I’ve often carried around a small notebook with me — not a Moleskine or anything conspicuous like that, but a cheap 3-by-5 inch notebook with narrow-ruled pages held together by a wire spiral. I used to buy them at the drugstore; the one I’m using now came from an office supply closet. I get nervous about forgetting ideas that occur to me, so I think that if I always carry a notepad I won’t lose anything. Usually I have it in my breast pocket, where I used to keep a pack of cigarettes or my phone.

The notebook and my phone are basically the same size, which makes me feel as if I’m replacing one with the other. Sometimes I worry that others will draw that conclusion too. The notepad can seem like a quirky anachronism, like a pince nez or suspenders. In the early 2000s, it was briefly trendy to carry around a stack of index cards held together with a binder clip as a simple and supposedly clarifying analog alternative to electronic organizers — this was somewhat ironically billed as the “hipster PDA.”

Few now would know what a PDA was, but the idea that one can score points by seeming to be against or above gadgetry has remained viable. When I pull out my notepad, it must seem as if I’m trying to signal to the world that I’m on some sort of digital detox, pursuing a pad-and-paper-based means to mindfulness. Look at me! I am hand-crafting a thought — a real, authentic thought. It’s not just some picture of my lunch or some other slice of social media ephemera.

I’d like to think I’m not signaling anything with the notepad, that its being cheap and generic somehow means that it automatically deflects attention. But there’s no escaping the self-importance in carrying one around, in believing that one is so writerly, and so deeply susceptible to important flashes of inspiration that one had better have a notepad at the ready.

The reality is that most of the pages in my notebook are blank. It’s actually rare that I think to write anything down, and when I do, it often turns out I have nothing to write with. (I end up dictating to my phone.) There are some notes scrawled in it, but most of these are illegible, having been written hurriedly or furtively. For all the angst about where and when it is appropriate to use a phone, writing in a notepad is far more aggressively antisocial. There’s no way to pull it off that isn’t extremely pretentious; I get self-conscious just thinking about it.

Still, I keep carrying the notepad, because it works as an anxiety absorber despite itself, not because it captures my deep ideas but because it repels them. It reminds me that it’s embarrassing to hoard my thoughts privately when I’m out with people: If I have something to say, I may as well just say it.

See All Posts by Rob Horning

Rob Horning is an editor at Real Life.