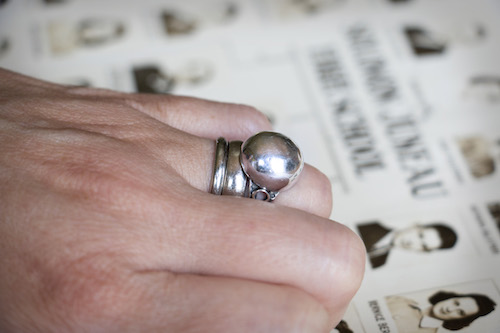 People frequently compliment me on the ring I wear above my wedding band: coworkers, checkout clerks, people at the gym. I always thank them and tell them it belonged to my mother. If we have more time and they seem interested, I tell them she called it a baseball ring. She said they were a fad at her high school (Solomon Juneau High in Milwaukee, where she belonged to the class of 1940), but she couldn’t tell me more than that. I suppose it was a “baseball” ring because the half-spherical shape is reminiscent of one, but who can really explain a teenage fad from any era? Memory fades, even if you lived it.

The only references to baseball rings I can find online show tacky items mass-produced for fans. Mom’s ring is unmarked, but I know it’s sterling because it doesn’t trigger my nickel allergy. When I saw a similar ring at an antique mall decades ago, I bought it. It’s slightly larger than my mom’s ring, also unmarked, also sterling, and they look fabulous when worn in combination.

I didn’t always wear a baseball ring in lieu of an engagement ring. When, in 1994, my then-unemployed boyfriend asked me to marry him (from behind the wheel of his 1957 Oldsmobile Rocket 88 as we cruised down Brannan Street in San Francisco), he couldn’t afford and I didn’t want a diamond. Spending an absurd amount on an engagement ring (the diamond industry helpfully suggests two months’ salary) seemed like a waste of money, not to mention a grossly patriarchal display of competitive consumerism. No, plain wedding bands it would be, for both of us.

But then my finger just felt so… naked. I wore my Czechoslovakian grandmother’s blingy platinum-and-diamond art deco cocktail ring until the solder broke where it was sized, some time after our tenth wedding anniversary. (Photos show my grandmother’s style to be sturdily utilitarian — that’s her narrow wedding band under my own in the photo. Why she owned a cocktail ring at all, let alone a sparkly beauty, is a mystery right up there with the origins of the baseball ring.)

I don’t remember when mom gave me the baseball ring, nor do I remember exactly when I slipped it on my left ring finger. I do know that by the time she died at the age of 92, her memory largely gone, I had been wearing it for years. She and I were not particularly close, but we share the sin of vanity. Every time someone says, “I love your ring!” I smile inside, and I know she does too.