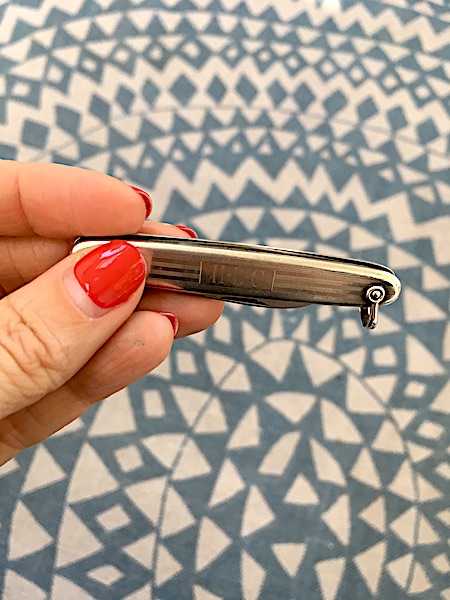 I’m a person who likes, often, to put things on my body and never take them off. I’ve been wearing my grandmother’s delicate turquoise-flower ring since the year she died, when I was 10 (I’m now 42). At 10 it was a little big for my finger, but I’ve grown into it. I wear a gold signet ring bearing my family crest and motto — a gift from a boyfriend — that has adorned my hand since the day I opened it nine years ago.

I carry something in my pocket every day that feels almost like it is welded to my body, but the fact that it isn’t — that I need to draw it to me — gives it a talismanic power. If for some reason it cannot be in my right-hand pocket, my hand will instinctively brush the area to check for it. It’s a two-and-half inch sterling silver pocket knife, monogrammed with my initials, HLC, in between bullets. It’s Italian. It has one small, elegant blade, which I use often (opening packages, for instance), and the nicest nail file I know.

Pocket knives run in my family. My father always carries one in his pocket; it’s why I started doing it, too, in my teens or twenties. When I asked him about this habit of accoutrement recently, he told me, “I’ve done that all my life, even when I was a child.” How old? “Probably 6 or 7.” I had assumed that my father got this practice from his father, who died when I was small; that was part of the reason I adopted it, to keep it going. When I asked my dad about my grandfather’s love of pocket knives, he told me he remembered Grandpa getting dressed up and wearing a vest, a gold chain, and a small gold knife that hung off of the chain.

My pocket knife — also called a pen knife, or a “dress knife” — was a gift from the same boyfriend who got me the signet ring. He knew I loved these slim silver knives, because I had recently lost one — unmonogrammed, passed along from my father — and was beside myself. I had lost it in the most abject way. I stopped to use the restroom at one of those stripped-down rest areas — the ones that just have a little hut with maps, bathrooms, and vending machines — on the highway somewhere between New York and Boston. In the stall after a brief visit, I stood up to flush the toilet, and my pocket knife tumbled out of my pocket and into the bowl, and was immediately swept away by the weirdly powerful industrial toilet as I screamed and plunged my arm in to grab it. It was gone — completely gone — in two seconds. So my HLC pocket knife, not a pass-me-down, but my very own particularized knife, came into my life as my lucky object, and it reminds me of both old family traditions and of new ones.

See All Posts by Hillary Chute

Hillary Chute is a comics and graphic novels columnist for the New York Times Book Review and the author of Why Comics? From Underground to Everywhere.