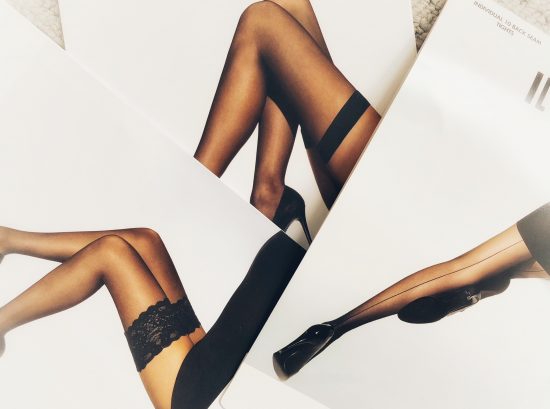 It was just after my husband told me he’d gambled away more than $100,000 that I became preoccupied with hold-up stockings. I was choosing an outfit for a work cocktail reception when I pulled out an old pair to wear. They were snagged and scruffy, with a musty smell. I was seized by an urgency to buy a new pair that would pull my outfit together, that would look and feel beautiful and expensive. I took two subways to get to a shop that carried the brand I liked.

The new pair was a rich black, semi-opaque, without that cheap shiny finish that made my thighs look like hot dogs. I put them on in the tiny elegant changing room and wore them out of the shop, like a child wearing her new sneakers out of the shoe store. The next week there was another dinner, this one requiring a sheerer pair. I travelled back to the shop, this time buying two, the bill edging close to $100. They made me feel sexy and independent, like I had been before marriage. Still, I tore up the receipt and hid the packaging in the recycling bin. I put my stockings on in the bathroom, where I couldn’t be observed.

Over the following weeks, as my husband and I fought, negotiated with the bank, cancelled the magazine and gym subscriptions, I went back again and again. I emptied my pretty paisley hatbox of coarse pantyhose and cheap hold-ups whose elastic squeezed the soft flesh of my upper thigh, making it spill out like pastry blobbing over the top of a pie pan. I created a home for my new collection, each pair preserved in its individual cellophane bag. On their labels I wrote which shoes they should be worn with — the suede knee-highs, the mid-calf black boots, the patent red high-heeled Mary Janes. A shop clerk persuaded me, without much effort, to buy a special bag in which I could gently hand wash them. I bought a bottle of lavender-scented lingerie detergent, which I measured out in capfuls.

By the time the divorce papers were being drafted and I was packing the bedroom, the contents of the box represented an investment close to $1,000. Some of the packs, bought just in case I needed a slight shimmer or a sexy back seam, were still unopened. I had quit frequenting the shop by then. I still had the delicate washing bag and the special detergent. I had plenty to wear for every outfit. I wouldn’t have to put them on discreetly in the new flat I would be sharing with my daughter. I am still a little bit in love with them — but starting to wonder if bare legs might work better this season.

See All Posts by Jennifer Howze

Jennifer Howze is a writer, journalist and social media consultant based in London. She is currently pursuing her Masters in Creative & Life Writing at Goldsmiths University.