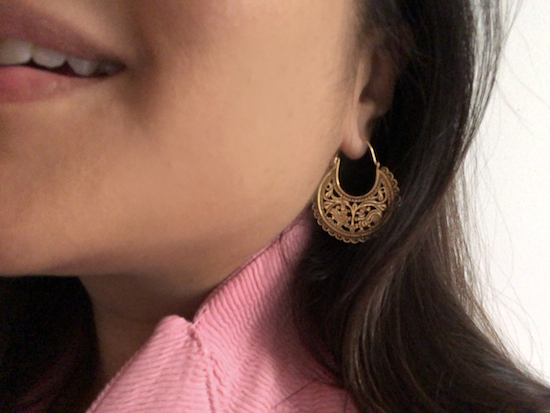 It all started with golden peacocks. Wandering around the Met Museum’s gift shop some years ago, I was drawn to moon-shaped earrings adorned with the majestic birds. There was something about the explosion of detail compressed in a small disc and the delicate scallop flourish around the edges. But I was most intrigued by the idea that they’re a replica of a pair from the Byzantine Empire.

Standing at the Met’s jewelry counter, I imagined the earrings as a kind of heirloom from a fabulous ancient ancestor and the $60 price was a courier fee for the museum’s time capsule. The fact that the peacock was considered a symbol of immortality — ”a creature incapable of rot and decay” in Christian iconography — made it even more beguiling. The notion was intoxicating: to wear a relic from a bygone era and channel the spirit of its original wearer for the day. It was my own twist on costume jewelry.

This internal joke started my collection. After the gateway peacocks came a pair of delicate Cloisters mustard seed earrings; followed by saucy teardrops adapted from Peter Paul Rubens’s Venus in Front of a Mirror. Soon after came dolphin-shaped Etruscan danglers; jiggly drop earrings from ancient Rome and my latest, a shoulder-grazing pair that look like tiny dessert forks from afar. At some point I decided that I would only buy earrings from the Met’s gift shop — justifying the splurge for the fact that I never pay the full amount of its suggested entrance fee.

It’s unusual for me to be drawn to such peacocky jewelry. Prior to the museum earrings, I mostly wore simple studs — usually a single pearl — which reminded me of the Philippines (once called the “Pearl of the Orient”) where I grew up. Modesty was something hammered in us in Catholic school, and wearing such expressive, showy earrings outside of a formal event was considered an act of deviance only tolerated for actors, matrons or drag queens.

Gift shop earrings, each pair with a story to tell, remind me that I’m shaped by cultures and richer histories beyond that I was born into. Wearing whatever pair I want feels like a triumph against the expected and the ordinary.

See All Posts by Anne Quito

Anne Quito is the design and architecture reporter for Quartz. She has a Master’s degree in visual culture from Georgetown University and an MFA in design criticism from the School of Visual Arts.