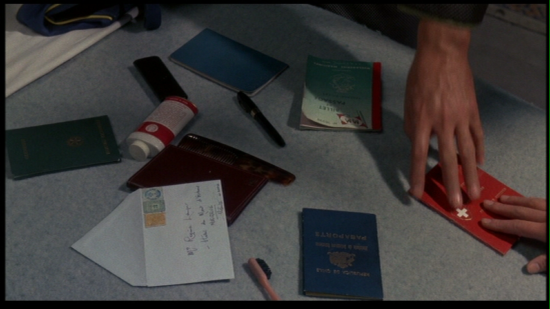 It wasn’t in the plan to queer the reading of some objects central to Charade, Stanley Donen’s thriller slash comedy slash love story slash fashion shoot slash travelogue of a film. And yet they keep nagging at me, those stamps.

If you can surprise anyone with the outcome of a film after 57 years, this is the place for a spoiler alert. Charade, which some call the best Hitchcock film Hitchcock never made, is an improbably plotty movie, fueled by greed and revenge and featuring some of the better staged murders ever captured on film. The movie turns on the hunt for something hidden in plain sight and so, after many viewings, does my understanding of it.

The stamps in question are affixed to a letter addressed to Regina “Reggie” Lampert (Audrey Hepburn) and tucked in an overnight bag belonging to her late husband, Charles. There’s other stuff in there, too: a pocket comb, a plane ticket to Venezuela, passports issued to Charles under various aliases.

Charles, as we learn, was a WWII spy and a traitor who, together with a group of fellow OSS agents made off with $250,000 in gold intended for the French Resistance. He double-crossed his accomplices and stole the loot; the film opens with him being murdered and tossed from a train.

During the slickly addictive two hours that follow various baddies give chase as they torture and knock one another off. These stylized, though gruesome, episodes are intercut with scenes of Paris rendered by Donen in a gauzy haze. Gorgeous and eerily depopulated, the city serves mostly as a backdrop for an unlikely romance between Hepburn and her co-star Cary Grant.

It was unlikely for several reasons. Grant was 59 when he made the film and was said to have declined the role unless it was rewritten so that the 34-year-old Hepburn was the pursuer and not the pursued. But there is something else. “I pretended to be somebody I wanted to be until finally I became that person,” Cary Grant once famously said. “Or he became me.” Watching the film again recently for the 20th time I was suddenly struck by how true a statement this is.

Charade is an arch theater of assumed identities and masks and, by the time Grant made it, his had begun to slip. Where in his early films Grant exploited his natural gifts for sturdy and acrobatic physicality to create a convincing, if exaggerated, heterosexual impersonation by 1963 the burnished veneer of that performance had worn thin.

In what is perhaps the film’s most celebrated scene, Grant showers fully clothed in front of Hepburn, camping so shamelessly that whatever erotic heat the two stars had in the movie circles down the drain. All his life Grant dodged or denied persistent rumors about his sexuality and thus a group of three unbelievably rare stamps affixed to a letter in Charade seem to me both a key to the plot and a kind of subliminal tell. Ruthless in its suppression of homosexuality, Hollywood never quite succeeded in erasing what had always been hidden in plain sight, obvious to anyone who bothered to look. 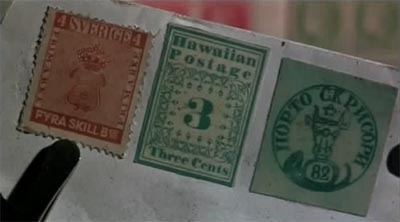 See All Posts by Guy Trebay

Guy Trebay is a reporter on culture and style for The New York Times.