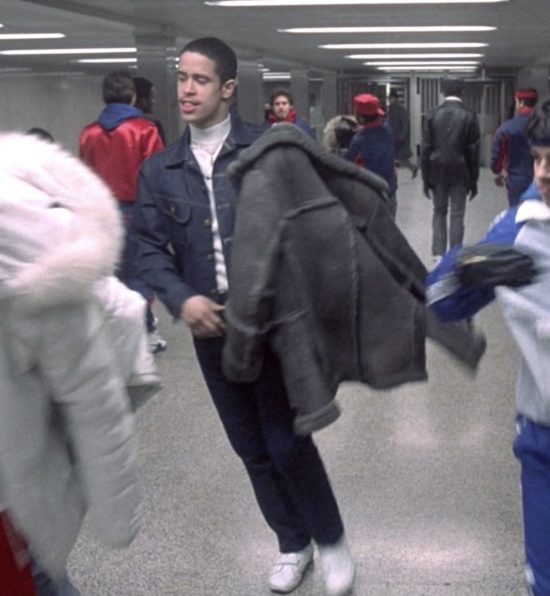 “Beat Street, the king of the beat / You see him rockin’ that beat from across the street / And huh-huh, Beat Street is a lesson too / Because ah, you can’t let the streets beat you / Uh!”… Prophetic words from Grandmaster Melle Mel, off the Beat Street soundtrack. I was 13 and watched it everyday (or bits of it) for a year straight, micro-analyzing it and using it as my style bible.

As an Italian American child from Queens, who moved and became a teen out in the Long Island suburbs when this movie dropped, I was always concerned with staying true to my “city boy” roots. I was a guido who loved all things B-boy, and never wanted to totally give in to the style and ways of suburbia. My look in high school had to scream, “I know shit you don’t.” So when I saw Crazy Legs of Rock Steady Crew roll up with a 3/4 grey sheepskin coat to battle their rivals in a subway station midway through the movie… I knew I had to have one in my wardrobe.

A lot of times Hollywood just gets it all wrong, and Beat Street, a story about kids growing up in New York City’s hip-hop culture of the early 1980s, could have been a disaster. But by sprinkling in some of the greatest DJs, rappers, and breakdancers of the moment, the producers brought true style and authenticity to the story. Although the coat wasn’t worn by any of the main actors, it was worn by one of the greatest breakdancers of all time, making it super important to me and the image I wanted to push out there my first year in a new school. I worked hard that fall and was able to scoop one up before it got cold.

For a young man like myself, a coat (I called it a “jacket”) like that was my armor. In the dead of winter, roaming the streets and looking for trouble with my friends, nothing could fuck with me when I had that extra skin on. It was this super warm, barbaric, Viking style, raw pelt that had me ready for any battle the streets could throw my way. It survived climbing fences to bomb (graffiti) train lay-ups, multiple late-night scuffles against other towns behind our local Burger King, and even an attempted slicing (with a pocket knife) in my high school hallway by a jealous metalhead, a senior four years older than me.

So it was ironic that its death was brought on by a good friend who yanked and ripped it beyond repair while horsing around in our school parking lot one Friday night. But have no fear. Anyone who knows me knows I always have a back-up. I scooped up a second-hand, brown version a year after that first purchase… just in case. I still have it today. At almost 50, when I have it on my back, the streets still can’t beat me.

See All Posts by Tony Arcabascio

As a teen growing up in New York, Tony Arcabascio did everything from working in a pizzeria to dancing at parties and clubs for events. In 1999, he and his friends started the lifestyle and fashion streetwear brand Alife; in 2001, they opened the world-renowned sneaker boutique Alfie Rivington Club. In 2006, Tony started the brand consultancy Tony Arcabascio Inc. Instagram: @TONYARCABASCIO