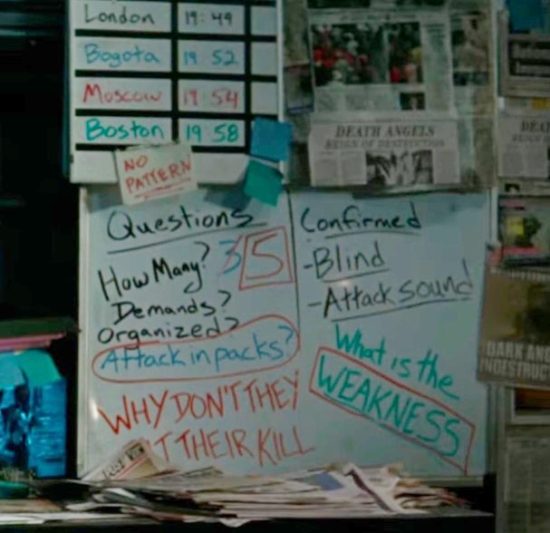 In a post-apocalyptic scenario involving seemingly indestructible monsters that react murderously to even the slightest sound, a really smart thing to do is write “What is the WEAKNESS” and “WHY DON’T THEY EAT THEIR KILL” on a whiteboard using what was presumably a squeaky green marker. Big fan of whiteboard note-taking here! It’s just that, unlike John Krasinski’s character in A Quiet Place, I wouldn’t risk getting my life brutally ended by perturbed creatures just to spoonfeed plot exposition to the audience via speculative, erroneously punctuated scribblings.

But I would proudly hang this whiteboard prop on my wall, as it is art more valuable than anything Picasso ever mustered. Just look at this efficiently communicative whiteboard and marvel at its many succinct clues! “Questions,” a list in one column begins. “How many? Demands? Organized? Attack in packs?” and the infamously question-mark-free “WHY DON’T THEY EAT THEIR KILL.” The other column is headed “Confirmed,” and reads. “Blind. Attack sound.” It’s all summed up by “What is the WEAKNESS,” which we know is crucial because he’s helpfully both written the final word in all caps and drawn a box around it.

Need more clues? Affixed to the whiteboard, press-clipping headlines scream “DEATH ANGELS: NIGHT OF DESTRUCTION” and “DEATH ANGELS INDESTRUCTIBLE?” A tacked-on board lists four cities and the times each were attacked, appended with a Post-it that concludes “NO PATTERN.” At other points in the movie, an updated whiteboard can be seen. “Armor” has been added to the list of confirmed facts about the creatures, as is a note that you’ll need medical supplies and sound-proofing to survive.

Stare at this masterpiece long enough and, even if you haven’t seen the movie, you’ll eventually realize, “Oh! This is a movie about a family struggling to survive in a world completely re-shaped by vicious, blind, armored, sound-attacking creatures that not only don’t eat their kill but also don’t seem to have any demands, motive, or agenda, and that unleash such unholy devastation that the press had no choice but to call them ‘death angels.’”

In other words, the whiteboard reveals, with rebus-like maneuvers, that these monsters can only be killed by luring them somewhere within eyeshot of the whiteboard itself, quickly parsing its clues to determine that the creatures’ armor is vulnerable to the high-pitched feedback given off by a modified cochlear implant, and capitalizing on the disruption to shoot them dead with a shotgun. Totally believable and very logical.

I both love and hate this whiteboard a lot, which makes sense, considering that the whiteboard is me. It’s logical. It likes a list. It is prone to dramatics. And it is prepared. I recently purchased a small magnetized whiteboard with markers for our refrigerator door and my wife and I are now using it to write frantic messages to each other about Coronavirus. “Questions,” it reads currently. “Need masks? How many? Deliver Friday?” and “WHY DON’T WE HAVE PURELL.” We are ready for the apocalypse.

See All Posts by John Sellers

John Sellers is the entertainment director at Thrillist and has written for such publications as The Believer, GQ, and Vulture.