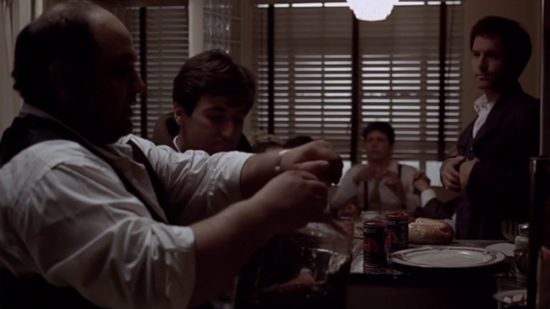 “Hey, come here kid and learn something,” Clemenza (Richard Castellano) calls out about an hour into the film. Michael (Al Pacino) meets him at the stove, at which point an odd little scene develops. Clemenza proceeds to teach Michael — and the audience — his recipe for a good spaghetti sauce. In the scene are all the necessary ingredients: oil, garlic, tomatoes, tomato paste, sausage, wine, sugar, and instructions for properly prepping and folding them in. Special attention is paid to the frying of the garlic, making sure that the tomato paste doesn’t stick in the pan, and adding the red wine only after the adding of the sausage, for both taste and smell. It’s as close to a cooking tutorial as you’re likely to get in a narrative scene and feels closer to the Food Network than classic cinema. All plot and character development has stopped for this recipe. So much so that Sonny (James Caan) enters the frame and puts an end to this community cooking lesson by announcing, “Why don’t you cut the crap?! I got more important things for you to do.” Within seconds, the film we know is back on track, with Clemenza delivering his famous line while finishing up the sauce, “Paulie? You won’t see him no more….”

Besides being a recipe that I’ve eaten and enjoyed, it’s also a wonderful reminder that a film gets to be many things as it unfolds — including a recipe for spaghetti sauce. I was thrilled when, years after tuning into this tiny moment, I discovered Coppola confirming his intentions for it. “At that point in my career, I wanted all my films to have a good recipe in them. And so even if the film didn’t turn out well, at least the audience would learn how to make spaghetti sauce,” Coppola explained.

I will admit to making a brief and private allusion to Clemenza’s spaghetti sauce in my work as a documentary filmmaker. Buried inside a 2017 film that I directed called Spettacolo — the story of a small Italian town that turns their life into a play — the town’s traditional pici pasta is made and a woman explains the recipe for the camera. Special attention is paid to the use of eggs and how to roll out the dough properly. While making the film, my co-director Chris Shellen and I would console ourselves that even if the film failed (which seemed like a possibility from time to time), viewers would at least discover how to make the pasta dish that we had both come to love. Eventually we went a step further in our meta-instruction — adding the full pici recipe to the back of the film’s DVD and Blu-Ray booklets. A film gets to be many things, including sometimes a recipe. Thanks, Clemenza, for the lesson.

See All Posts by Jeff Malmberg