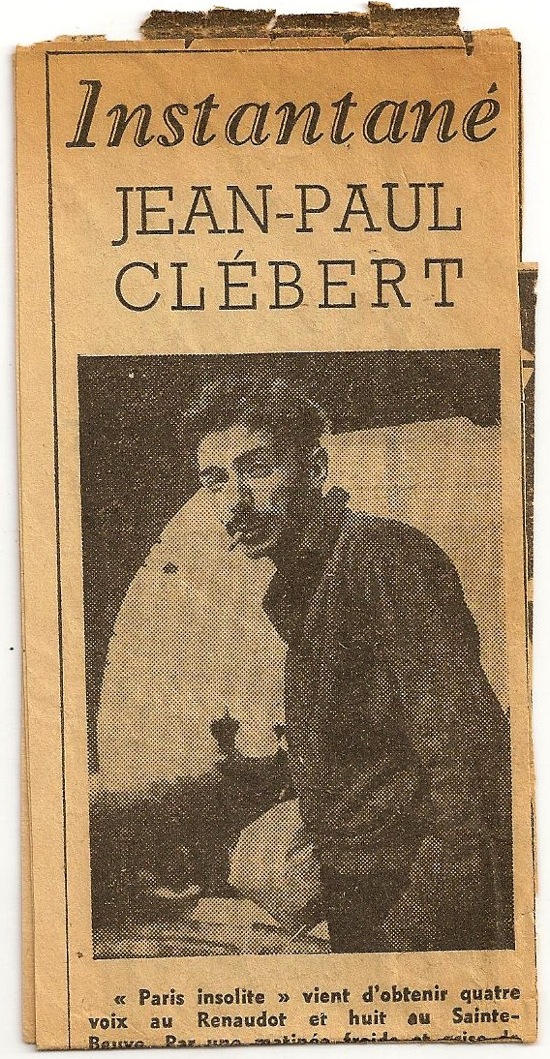 JEAN-PAUL CLÉBERT (1926-2011) dropped out of school and joined the Resistance at age sixteen. After the war and some peregrinations in Asia, he came back to Paris and entered its shadowy underside, living for three or four years as a clochard. (In argot, the cloche — literally the “bell” — is the sky, and clochards are those who sleep under it.) His account of that time, Paris insolite (1952) is a rollicking, poetically charged tale of privation and adventure, a first cousin of Kerouac’s On the Road for all that it takes place entirely within the confines of the city. Clébert finds all the hidden worlds — the shacks and Gypsy wagons on the periphery, the ostensibly vacant lots, the rescuers’ cabins on the Seine, the surviving corners of the medieval city, the mushroom farms and serpentariums hidden in apartments — and defines their common thread of freedom from the straight world. The book was taken up both by the remaining Surrealists and by the nascent Situationists, who based their theory of the dérive on Clébert’s principles, using the book as vademecum and literal guide. Clébert went on to write 32 other books — including The Gypsies (1961; translated into English 1963), arguably the finest study of the subject, based on both archival research and personal experience — as well as many works on the history of southern France, where he moved in 1956.

On his or her birthday, HiLobrow irregularly pays tribute to one of our high-, low-, no-, or hilobrow heroes. Also born this date: Kazimir Malevich and Terence Fisher.