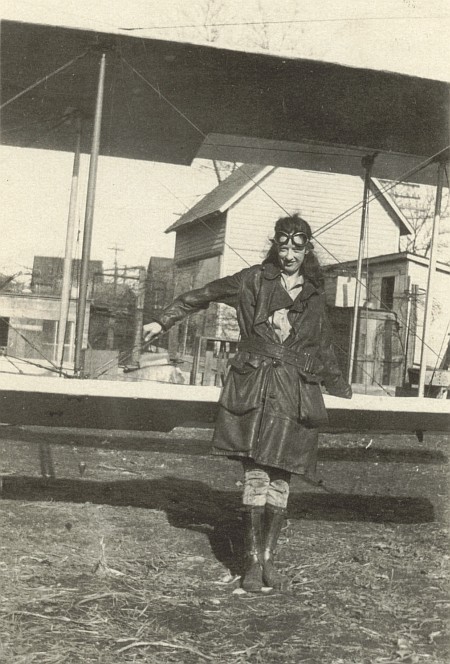 You’d have no sense from her 92-word New York Times obituary the extent to which MARY ANITA “NETA” SNOOK (1896–1991) was an aviation pioneer. The original Snooki had always loved velocity and weightlessness. As a child, she dreamed of piloting the hot air balloon at her county fair. Instead, the curly, red-headed tomboy consoled herself by racing her bike downhill with her feet on the handlebars. In 1917, she was the only female student at the ill-fated Davenport Flying School, where students had to construct an airplane before they could learn to fly it. After WWI, Snook spent two years rebuilding a battered Canuck in her parents’ Iowa backyard. Her license restricted her to solo flights but she took passengers up in the air for a dollar a minute. Barnstorming the country, she earned a measure of fame as that rare bird, an aviatrix. In order to fly year-round Snook moved to Los Angeles where she became the first woman to operate a commercial airfield, Kinner Field. “There is something hypnotic,” she would write, “about the continued droning of smoothly-running plane engines.” One day, a tall, striking woman with wide-set eyes and flared nostrils walked in, her father in tow, and announced, “I want to fly. Will you teach me?” The woman was Amelia Earhart. Snook became the Aristotle to Earhart’s Alexander the Great, even penning a 1974 memoir, I Taught Amelia To Fly. She herself flew all too briefly. Married and pregnant, Snook prayed that if her child was born healthy she would give up flying. She kept her bargain with God. After 1922, she never again piloted an airplane.

On his or her birthday, HiLobrow irregularly pays tribute to one of our high-, low-, no-, or hilobrow heroes. Also born this date: Fred Van Lente, Jack Benny, and Max Horkheimer.