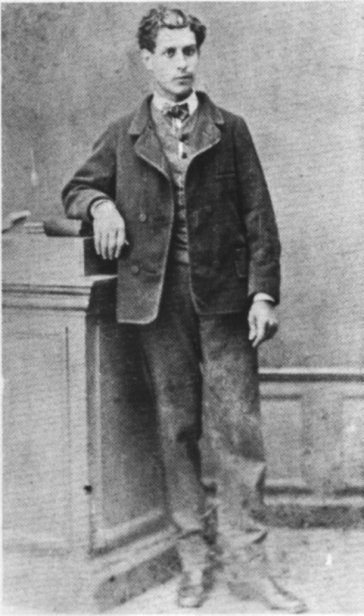 Isidore Ducasse (1846-70), who styled himself COMTE DE LAUTRÉAMONT, was born in Montevideo, Uruguay, during its eight-year siege by Argentina. He was sent to France in 1859 for his secondary studies, and moved to Paris in 1867, where he wrote the only two works by him that have survived. Les Chants de Maldoror was published between 1868 and 1870. Its bookend, apparently devoted to good as Maldoror was to evil, has never been found; only its preface was published, as Poésies, in 1870. He died of an unidentified fever in November of that year, during the siege of Paris.

His books passed unnoticed in his time; his real career was posthumous. The Belgian Symbolists discovered Maldoror in the 1890s (it had been published in Brussels); the Surrealist Philippe Soupault independently unearthed a copy in 1917; André Breton and Louis Aragon found the only extant copy of Poésies in the Bibliothèque Nationale two years later. (The only known photograph of him wasn’t found until 1977.) Maldoror, a violent apotheosis of Romanticism, became one of the foundational works of Surrealism. Poésies, in particular its apologia for plagiarism, greatly influenced the Situationist International. It has been demonstrated that both works are honeycombed with repurposed sentences by other writers, Maldoror particularly from the Histoire Naturelle by a certain Dr. Chenu, and the aphoristic Poésies from Pascal, La Rochefoucauld, Vauvenargues, and many others.

“Poetry should be made by all. Not by one.”

On his or her birthday, HiLobrow irregularly pays tribute to one of our high-, low-, no-, or hilobrow heroes. Also born this date: Elmer Bernstein.