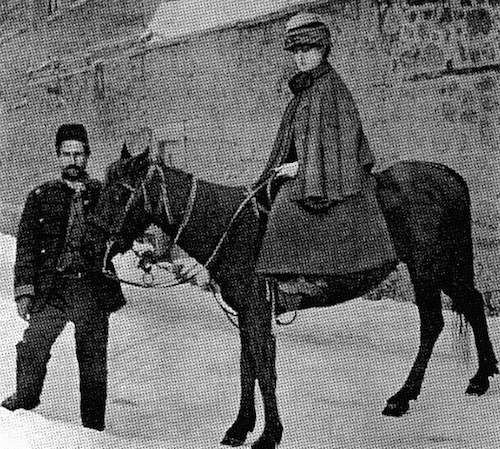 ISABELLA LUCY BIRD (1831–1904) left her native England in an attempt to improve her health; it worked so well she spent the rest of her life wandering the globe. The sickly daughter of an Anglican clergyman, she had often been confined to her bed as a child; eventually, she was prescribed travel. It was not the salutary powers of distant climates that spurred her recovery but what she called “sources of novel and sustained interest.” She would gallop through 800 miles of the Rockies on horseback, climb volcanoes in Hawaii, and live among the Ainu people of Japan. She was nearly stoned to death by a mob in China. Tibet, Persia, Morocco, Turkey, Korea, Kurdistan, New Zealand, Canada, and Scotland also entranced her. Wherever she journeyed, she wrote voluminously. Unlike many other female explorers, she didn’t come from wealth. Bird had to support herself, which she did by penning bracing and eminently readable travelogues; many were taken from the letters she sent to her sister Henrietta. Visits home seemed only to aggravate Bird’s ailments and she developed a pathological aversion to her homeland — or perhaps just to the domestic tedium of her sister’s world. In 1892, after initially turning down the Royal Geographical Society’s invitation to speak because they wouldn’t accept women, she was inducted as their first female Fellow. Bird was not only one of the most adventurous women of her era, she was among the most traveled and the most literary. At the time of her death at age 73, she had circumnavigated the globe three times and was planning her next excursion to China.

On his or her birthday, HiLobrow irregularly pays tribute to one of our high-, low-, no-, or hilobrow heroes. Also born this date: Mikhail Lermontov, P.G. Wodehouse, John Kenneth Galbraith, Italo Calvino.