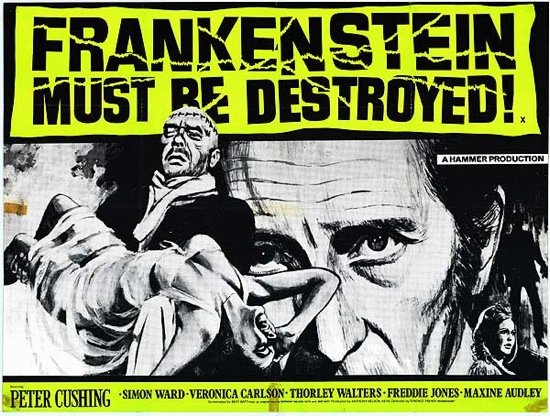 The cinematic argument that really gets up my nose is the insistence that horror works best by insinuation, that nothing you put on the screen can match your imagination. There’s nothing wrong with the aesthetic itself; as a contented owner of the Val Lewton box set I can vouch for the pleasures of artful shadowplay. What’s problematic is the dainty aversion to lowbrow gore. Lewton’s The Leopard Man is haunting, lyrical, a masterpiece of suspense and dread. But it’s not horror. If you want to know horror I refer you to the look on my 10-year-old face as I saw TERENCE FISHER’s (1904-80) Frankenstein Must Be Destroyed on the big screen, watching gouts of blood pouring out of the monster’s head under the sickening rasp of a bone saw carving through flesh and skull. Before directing the key Hammer Horror classics, Fisher worked his way up through the British Gainsborough studios as a film editor (cutting the gloriously subversive The Wicked Lady), and it’s an editor’s sense of pacing that he brings to his work. It’s easy enough to credit Hammer’s success to its charismatic leading men Peter Cushing and Christopher Lee, the boobs-a-lot costuming of its actresses, and the plush art direction. But it was Fisher who ushered in the great early ’60s horror boom of Hammer, Mario Bava, and Corman’s Poe movies, and splashed the screen red. Fisher’s gift to the horror genre is exactly equivalent to William Eggleston’s contribution to art photography — he dragged it out of black and white and into color.

READ MORE about the Partisans Generation (1904-13)