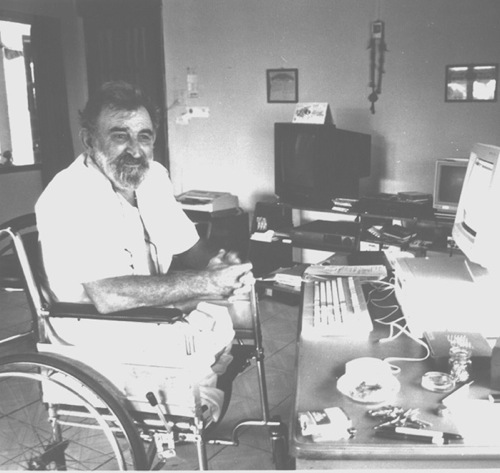 The tales of adventurer, peg-legged seafarer, and advocate for the disabled TRISTAN JONES (1929-95) fill 18 books, most of which should be categorized as autobiographical fantasy. The astonishing part of his story is not that he lied so often and so brazenly, but that as much of what he claimed to have dared and accomplished in his life is actually true. He did, indeed, travel 345,000 miles under sail in small boats — 180,000 of those miles solo. He was the first to sail a foreign boat on Lake Titicaca, the highest lake in the world. He was the first to take a vessel across the width of South America, to sail in the Mato Grosso, and (after he had lost a leg to gangrene) to cross Europe in an oceangoing trimaran, from the North to the Black Sea. While these maritime records alone would qualify him as one of the great seadogs of modern times, when you figure in the raucous, epic quality of his prose, its magical Welsh lilt combined with an irascible lyricism reminiscent of wayfarers of a bygone era, Jones nearly lives up to his own promise: that he “would set a record that will not be broken until man finds water amongst the stars.” A longtime fan, I gave my daughter the middle name of Tristan, never suspecting that his lies permeated every aspect of his personal history — including his first name, which appears to have been Arthur. Or that rather than merely embellishing his tales of incredible voyages he plagiarized more than his share from sailors who came before him, or simply made them up out of a slurry of ocean spray and the fumes of dark rum. Ice, his account of being trapped in the frigid Arctic during his attempt to sail farther north than anyone else, is a pure fabrication, right down to Nelson, the one-eyed, three-legged dog who was Jones’ constant companion. Contrary to what he claimed, Jones most likely wasn’t born at sea, wasn’t in the Royal Navy during World War II, was never on a vessel blown up by guerrillas, was never tortured in Buenos Aires, wasn’t attacked by Arabs or rescued by Ethiopians. He probably wasn’t even Welsh. Instead, my daughter’s namesake appears to have been the wiry, tall-tale-spinning old salt with the wooden leg at the end of the bar, always the first to start a fight and the last to stagger out the door, who, somehow, shook off the hangover the next day to churn out enchanting, crystalline prose worthy of the Arctic ice he never saw in this lifetime, but imagined as vividly as he cursed his doubters, spurned defeat, and embraced his seagoing, flawed, unfailingly interesting life.

On his or her birthday, HiLobrow irregularly pays tribute to one of our high-, low-, no-, or hilobrow heroes. Also born this date: Edmund Wilson, Gary Snyder, Roberto Rossellini, Don Rickles, Thomas Pynchon.

READ MORE about members of the Postmodernist (1924-33) Generation.