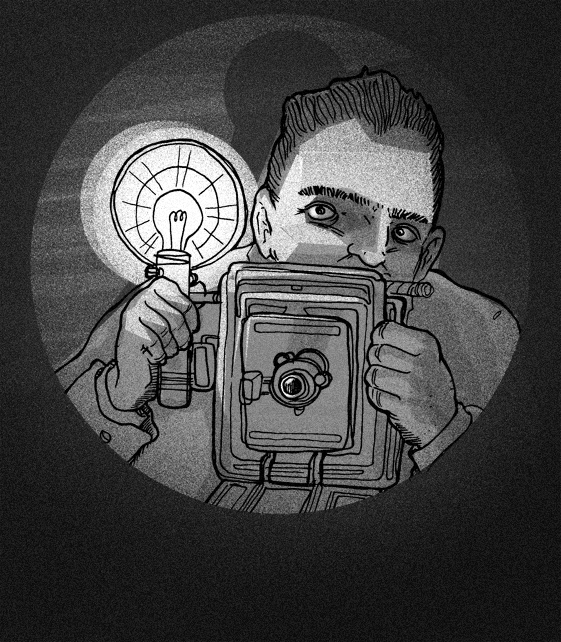 WEEGEE (Usher Fellig, 1899-1968) was the archetypal American tabloid photographer. His name may have derived from “squeegee” — from early newspaper darkroom jobs — but he clearly preferred that it be thought to come from “ouija,” a reference to his allegedly precognitive talent for arriving at photo opportunities while the bodies were still warm. He is often given too much credit, for pioneering crime-scene photography, for example, an art that had been mastered by others long before his time. On the other hand he was a poet of the urban night, rivaled only by Brassaï in his ability to enhance its mysteries while subjecting them to flashbulb glare. And he was maybe the greatest populist photographer ever. Like an actor or a writer who can unassumingly articulate the wishes and fears of the average pedestrian, Weegee was the stand-in for his audience — the people who crowded around and gaped at accidents and shootouts and movie premieres. He was direct, broad in his humor, low-church in his critique, alternately sentimental and cruel. In his greatest pictures he dispensed with the ostensible subject altogether and looked at the onlookers, letting their eyes transmit the horror or pathos or occasional beauty. He faded from immediate relevance around the time his constituency fled to the suburbs. — illustration by Joe Alterio

On his or her birthday, HiLobrow irregularly pays tribute to one of our high-, low-, no-, or hilobrow heroes. Also born this date: Egon Schiele, Samuel Z. Arkoff, Kira Roessler, Djuna Barnes.