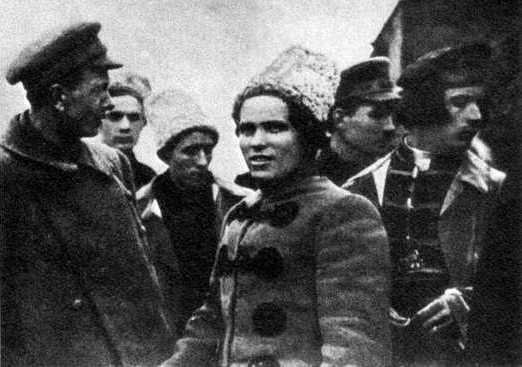 No one has come closer than NESTOR MAKHNO (1888-1934) to establishing that paradox, the anarchist nation. Born in rural poverty in the Ukraine, he got his education as a teenager in prison, where he had been sentenced to life for killing a policeman. Upon his release in the amnesty of 1917 he led armed peasants in expropriating landowners, and within months had organized an autonomous region of some 400 square miles in which farms and factories were collectively run and goods traded directly with collectives elsewhere. After the Bolsheviks handed the Ukraine to the Germans and Austrians in the treaty of Brest-Litovsk in 1918, Makhno’s guerrilla units managed to expel the interlopers within a year. His reconstructed libertarian society then covered most of the Ukraine; it lasted six months in the face of opposition from Moscow. In the ensuing chaos his Black Army fought a bewildering two-front war, sometimes against the Reds, sometimes with the Reds against the Whites. At the end of his rope, Makhno fled to Romania in 1921. Slandered by the Bolsheviks as a rapist and a conductor of pogroms, he died in Paris of heartbreak and drink.

On his or her birthday, HiLobrow irregularly pays tribute to one of our high-, low-, no-, or hilobrow heroes. Also born this date: | Mahalia Jackson | Julian Schnabel |