To idle is to work on meaningful and varied projects — and also to take it easy. If you’re interested in my 4Q2017 projects, please keep reading; otherwise, don’t. The title of this series of posts refers to this self-proclaimed idler’s inability to take it easy. 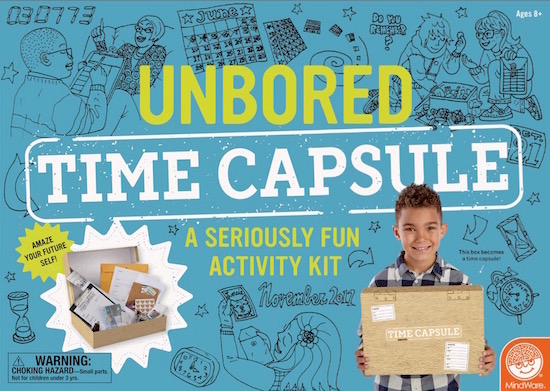 Fall was prize season for the year’s best new toys and games — and UNBORED Time Capsule, which Elizabeth Foy Larsen and Tony Leone and I developed for MindWare, was a big winner! Our UNBORED Carnival kit didn’t do too badly either. 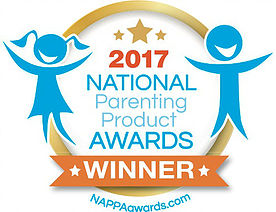 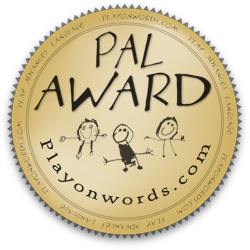 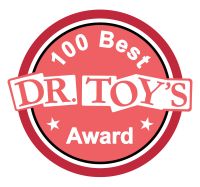 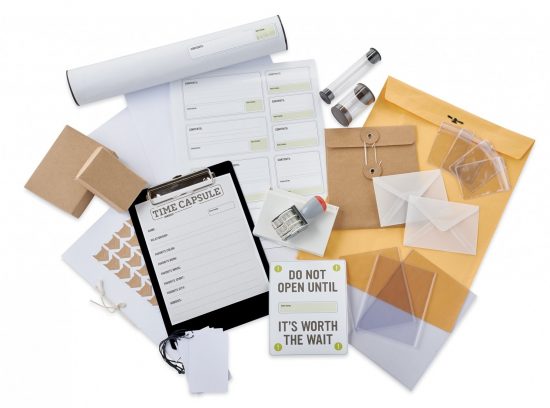 CHECK OUT ALL UNBORED KITS AT MINDWARE. The kits are also available from Amazon, and (hopefully) your local toy shop.

For more information on the UNBORED Project, please click here.

During 4Q2017, Rob Walker and I published 25 new nonfiction narratives, here at HILOBROW, as part of our ongoing PROJECT:OBJECT series. The theme, this time: LOST OBJECTS. Perhaps the object was misplaced, or given away… or perhaps it was destroyed, or stolen? However it was lost, the important question is: Why do some objects keep coming to mind, long after they’ve vanished from our lives? Here’s the LOST OBJECTS introduction.

Also! We recruited 25 talented guest artists to illustrate the stories. We’re thrilled with how this series turned out, and hope to develop an illustrated LOST OBJECTS book. Stay tuned…

Rob and I are very grateful to the LOST OBJECTS volume’s talented writers and illustrators, many of whom donated their fees to the ACLU.

I’m co-founder of the semiotics-fueled branding and strategy agency SEMIOVOX, based in Boston and New York. During 4Q2017, we conducted US and global audits identifying and diagramming the networks of unspoken cultural codes — in categories from Spirits and Personal Care to Financial Planning and Energy Bars — around ideas, values, and higher-order benefits such as “Rewriting the Rules,” “Playful Hedonism,” “Unlocking Potential,” “Discovering What Matters,” and “Seeking Out the New.” 1Q2018 is already shaping up nicely.

During 4Q2017, I traveled to Miami, New York, Secaucus, and elsewhere on Semiovox business. Why? In order to inform and inspire positioning, breakthrough pack design, retail design, and communications optimization, we often combine semiotic audits with qualitative research, from consumer-led shop-alongs and cultural tours to co-creation labs. Also, my business partner Ron Rentel (of Consumer Eyes) and I run face-to-face strategic and tactical workshops — designed to ensure that the audits’ insights are immediately actionable — for brands, companies, and their agency partners. Ron, as usual, traveled around the world.

I’m the editor and publisher, here at HILOBROW. To see what we’ve been up to — Adam McGovern’s weekly THIS: series, Lynn Peril’s monthly PLANET OF PERIL series, James Parker’s KALEVALA series, curated reprints from friends, and more — please check out the HILOBROW 4Q2017 post.

In addition to the LOST OBJECTS series (see above), in this post I’ll just mention two other 4Q2017 series that I edited for HILOBROW. 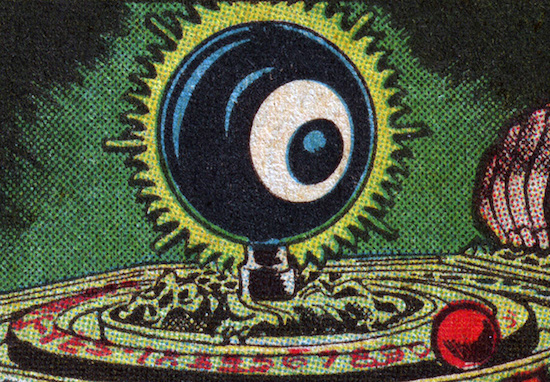 Lisa Jane Persky on EXPECTATIONS | Veda Hille on THE DUSTY REVEAL | Wayne Chambliss on THE RIDE-ALONG | Kenya (Robinson) on BALANCE BEAM | Ken Layne on THE DOPPELGÄNGER | David Levine on THE GROOVY | Joe Alterio on THE DROP-OFF | Jennifer Krasinski on PREDATORY VIGILANCE | Libi Rose on ELECTROMAGNETISM | Carl Wilson on THE TRACKER | Mimi Zeiger on THE RED MOON | Vanessa Berry on DARK MATTER | Peter Doyle on THE CHAIN OF FOOLS | Joy Press on THE WAYLAYER | Sarah Weinman on IN THE CORNER | Stephanie De Gooyer on THE INVASION | James Hannaham on THE URBAN HAWK | Annalee Newitz on THE PUBLIC CHARIOT | Jace Clayton on THE BLEACHED FLAG | Chenjerai Kumanyika on THE VEIL. 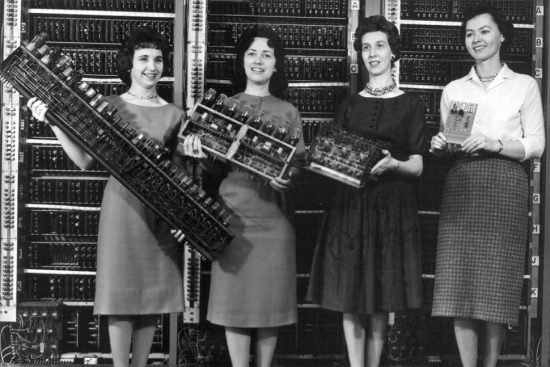 During 4Q2017, we wrapped up this year’s weekly series #SQUADGOALS, which is dedicated to HILOBROW’s friends’ favorite collectives and cadres. Here’s the 4Q2017 #SQUADGOALS lineup:

I am very grateful to HILOBROW’s talented and generous contributors — many of whom have donated their writing/illustration fees to the ACLU.

During 4Q2017, I contributed new installments to two HILOBROW series. 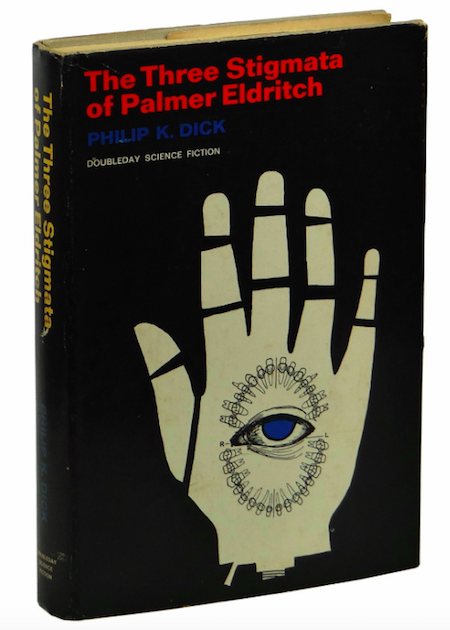 The complete NEW WAVE SCI-FI 75 list (a work in progress) is here. 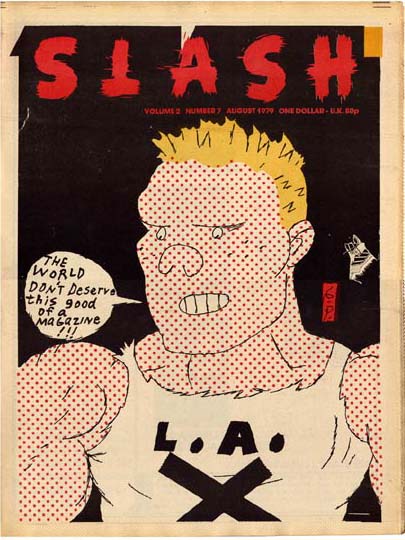 As part of my ongoing BEST ADVENTURES series, during 4Q2017 I offered notes on 40 of my favorite adventures. The goal, eventually, is to identify the 10 best adventures from each year of the 20th century. Here’s the 4Q2017 BEST ADVENTURES lineup. 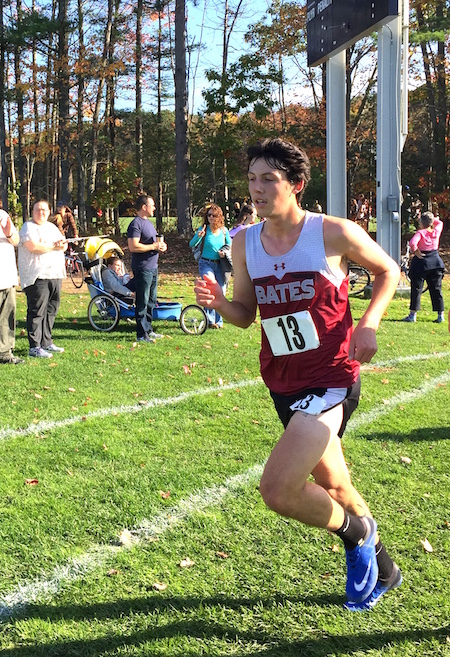 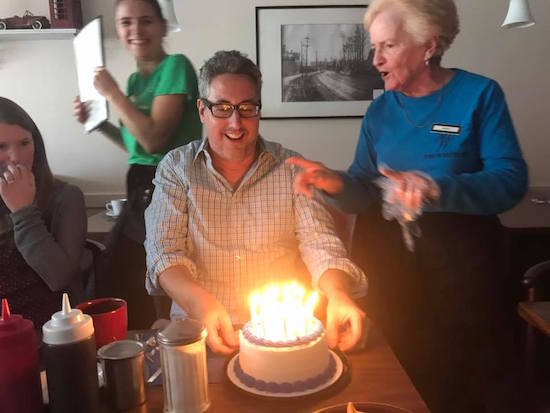 In October, I turned 50! Here I am celebrating with the staff of the Westbury Diner. 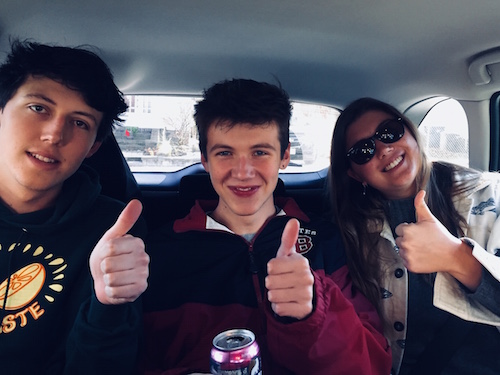 In November, we enjoyed hosting our niece Haley for Thanksgiving. 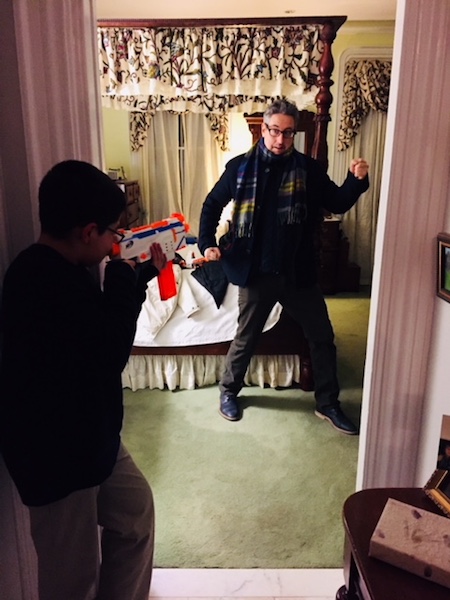 In December, I went to my friend Chris’s 50th birthday party and this happened.