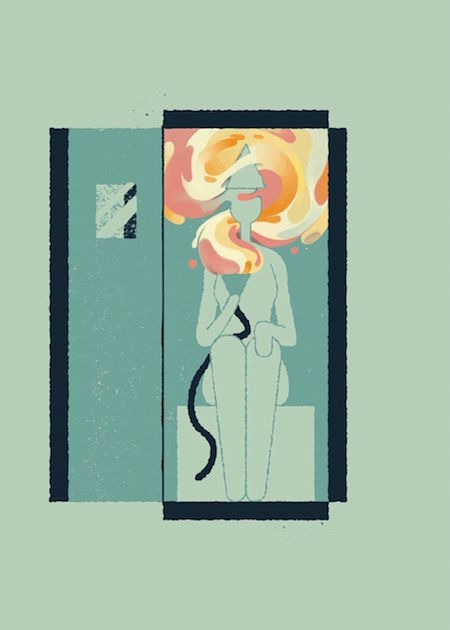 Picture an outhouse, or perhaps a public telephone booth with a vent window. Inside it, there is room for one adult to sit on a plank. The box is candy-apple red. The inside is lined with aluminum; the outside is constructed of wood. Between the wood and the aluminum are layers of cork and more aluminum. An 18″ cube, made of the identical materials, from which snakes a coil also made of these materials, sits under the plank, and the end of this is a plain aluminum funnel.

In case of alien attack, get it on! This is the only part of Reichian theory that I find appealing.

By the time I was born, my mother was in conventional Freudian analysis (a practice I also find unappealing) and used the accumulator more as a kind of immunotherapy. If she did not feel well, she sat in it, clothed, breathing into and out of the funnel attached to the coil attached to the cube comprised of aluminum and cork.

Shortly after my mother died, it struck me that an orgone accumulator, hand-built by Wilhelm Reich, a man who managed to annoy first the psychoanalysts, and then the Marxists, and then the Nazis, and finally the FDA, should probably be in a museum. I got that ball rolling, and then reluctantly contacted my father about the accumulator.

He put me off for quite awhile, and finally allowed as how his girlfriend had thrown that dusty old thing away. I feel a set of things about this so complex, and so paralyzing, that I hardly know how to begin to access all the things I feel, let alone to articulate them.

Or well, no. That’s not exactly true. I have a suspicion how I ought to begin such an exploration of my very well-repressed feelings: in a goddamn orgone accumulator, naked as the day I was born.

ABOUT THE ARTIST: Minnesota transplant Emory Allen creates whimsical characters and animations for clients the world over. Inspired equally by Jim Henson, Herb Lubalin, and Wolverine, his work is the product of an adult who never learned how to stop being a kid. Emory’s latest adventure is co-founding the animation and illustration studio, Foreign Fauna.