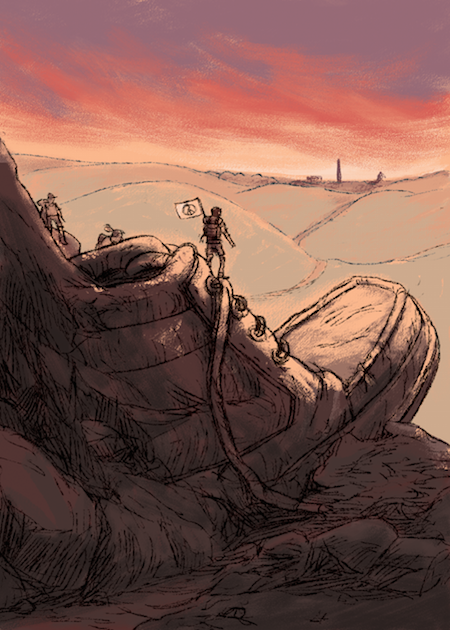 In 1986, I walked across the country. Sometime the following year, I threw away my shoes.

They were scuffed brown leather Rockports, with soles that had grown cardboard-thin. Although I’d also gone through a couple Converse high tops on that nine-month, 3,300-mile trek, it had been this single pair of shoes that carried me on the longest days out of Los Angeles through the Mojave desert, across Colorado mountains and Nebraska farm fields, and ultimately into Washington, D.C.

We were a Ronald Reagan-era anti-nuke demonstration called The Great Peace March. Don’t worry if you never heard of us: We were more modest than Live Aid and Hands Across America. About eight hundred of us made it from West to East, staying on our feet and talking about arms control.

It is sometimes hard to imagine now those days before cell phones: Walking fifteen or twenty miles a day on access roads, flashing peace signs at cars, talking with friends, out in the sun and rain, step after step. Personally, if my life has ever had a crossroads, it was on that march. By then a 23-year-old dropout of two colleges, I decided somewhere along the road that I was going to start completing things, and I started to think I might want to be a writer.

When the march ended, I moved to Minneapolis and enrolled in the University of Minnesota. I was taking classes there and jobbing around the Twin Cities when, one day, I decided to clean my two-room apartment. Without much thought, I added the Rockports to the trash and took it all out to a dumpster.

I still am not sure what came over me. Perhaps I was seized with the faulty notion that making headway means the removal of ballast. I do remember that I was clearing out some space for a friend who was to stay with me until she found her own apartment. Whatever the feeling, it lasted for about two days. I soon missed just how those thin soles evoked the miles that had worn them down. I went out to retrieve the shoes from the dumpster. It was too late.

This past summer, we had a thirty-year reunion of The Great Peace March. Marchers — and more recently their kids — have become dear friends. It was like old times. We played ping pong and sang about nuclear stockpiles. We walked a few miles to a rally in Iowa City. There was no shortage of memories.

Also, the friend who moved into my apartment never moved out; we got married.

But I still miss my shoes.

ABOUT THE ARTIST: Jackie Roche makes illustrations and nonfiction comics for places like Harvard Library’s annual Fair Use Week, The Nib, and anthologies including Sweaty Palms and Colonial Comics: New England, 1750–1775.

See All Posts by Michael Tisserand

Michael Tisserand is a New Orleans-based author of, most recently, Krazy: George Herriman, a Life in Black and White. He can be contacted at michaeltisserandbooks.com.